Born on the Iron Range, this retail chain has grown by skillful adaptation.
April 01, 2020 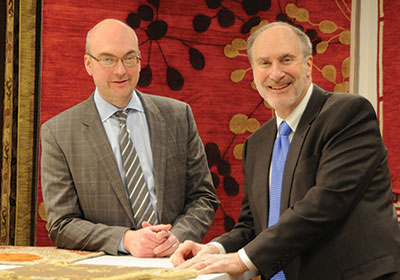 When the recession hit, the family that owns the Schneiderman’s furniture chain made a painful decision—close the original store in rural northern Minnesota. As CEO Larry Schneiderman notes in his book, Call of the Couch, the store had long become a “financial drain.” Keeping it open was an exercise in “wishful thinking.”

Though a tough decision for this close-knit family operation, Schneiderman’s did close that store, and it made other adjustments to make its operations more efficient. It’s that ability to adjust to market changes that has kept it strong in the highly competitive furniture game.

That nimbleness is in Schneiderman’s DNA. Larry’s father, Max, who grew up in Duluth, had always wanted to run his own business. He saw that opportunity with a grocery store in Meadowlands, a tiny town north of Duluth surrounded at the time by prosperous farms. But the store struggled, and he took a side job as a furniture salesman. He began selling furniture in the store; groceries eventually disappeared. People in Duluth and Iron Range cities liked the chairs, tables and sofas he sold and the service he provided. It became a destination.

Max’s sons Larry and Russ purchased the business in the 1970s, two decades into its run. In 1982, they opened a second store, this one in Duluth. Within a couple of years, Russ saw an opportunity in the Twin Cities. In 1984, Schneiderman’s opened a store in Lakeville; by 1999, it had four stores in the metro area. Back then, Larry Schneiderman says, “it was easier,” because Schneiderman’s had carved out its own niche. At the high end were stores like Gabberts; at the lower end were discounters such as Slumberland. “We sold top brands at genuine discount prices.”

Now, he adds, there are other stores in that mid-market niche. What’s more, “people are buying on price rather than brand,” Schneiderman says. In the 1980s, customers would ask for Thomasville or Flexsteel. These days, they’re more likely to choose furniture that’s nearly as good for a quarter the price.

So how does Schneiderman’s compete today? One way is with personal service—following up quickly on complaints, for instance. But Mike Abramson, who’s known the family since 1972 and insured their business’ property and managed its 401(k) plan for many years, also believes their relationship with employees has played a significant role. “The level of respect and the level of care is very unusual,” Abramson says. Indeed, he jokes, “if I were to point out a fault Larry had, it’s that an employee probably would have to kill someone” in order to lose his job.

Abramson admits that this loyalty isn’t the sole reason for the company’s ongoing success. He also points to Schneiderman’s “beautiful, well-maintained stores,” which the company keeps up to date and on-trend. It continues to maintain its position in the mid- and upper-medium part of the market.

Schneiderman’s Furniture opened a store in Rochester in 2014. Under Larry’s son Jason, who now owns the business, Schneiderman’s continues to adjust to the market. Jason has turned the website into a powerful sales and marketing tool; the company now delivers throughout the U.S. Still, it’s the legacy that continues to draw customers. “In the end,” Larry Schneiderman says, “they buy it for Schneiderman’s.”

The Meadowlands Legacy Lives On

The town of Meadowlands, where Schneiderman’s Furniture began, had a 2010 population of 134. In 1948, it was no bigger, though according to Wikipedia the town also included a creamery, a movie theater and a Ford dealership. Schneiderman’s showroom remained in Meadowlands till 2009. It still has administrative offices there, where it employs 18.