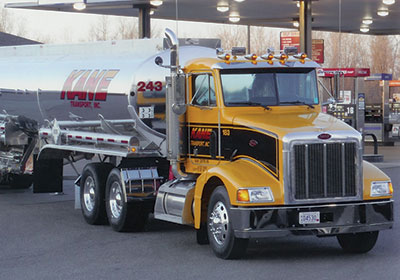 To get a sense of what makes Kane Transport a success, talk to Frank Orton. He’s vice president of Walker-based Orton Oil, which owns and operates 15 convenience/gas stations and wholesales to about 15 more in central Minnesota. Orton has been a customer of Kane Transport for a few decades.

“The current market for gasoline is very volatile,” Orton says. “You have large price changes on any given day. If gas goes up 10 cents today and the price changes at 6 p.m., the ability to get as many loads on the right side of the clock is a big deal financially.” Since Kane Transport can deliver loads of gas as needed, “their size is a big advantage to them,” Orton says, “and for us.”

That timing capability is one of the reasons “we are one of the most, if not the most, expensive carriers,” says Angela Kane Haas, Kane Transport’s CFO and a third-generation leader of the family business, which has dual headquarters in Sauk Centre and Inver Grove Heights. But many find it’s worth it. “We have had customers leave us because of cost,” she notes, “but sometimes four or six months later come back to us because the other carriers just can’t deliver on their promises.”

Haas’ company has been delivering since her grandfather founded the business in 1949 from his Sauk Centre home, trucking gasoline and fuel to western Minnesota and eastern North Dakota. Customers were, and are, primarily chains such as Orton Oil. The Upper Midwest is a pretty competitive market, Haas says. “We have a lot of smaller carriers in this market.”

Kane Transport is now one of the largest in that convoy. Its revenue has grown almost 50 percent in the past five years, thanks to both organic growth and acquisitions. “We have expanded,” Haas says, “and gone into areas where our customers have asked us to grow.”

Starting in the late 1980s, as the transportation industry was deregulated, Kane expanded beyond central Minnesota into the Twin Cities. Its Inver Grove Heights location now represents its largest terminal. This past March, Kane purchased a Mankato hauler, again expanding its geographic range. “They were really good carriers, smaller than us,” Haas says. “The owners were reaching retirement age and didn’t have a succession plan.”

In 2012, Kane Transport made an acquisition that took it in a new direction—flatbed hauling (see “Kane’s New Wheels,” below). It took a little while for Kane to master this new market, which works mostly through freight brokers. But “it is really a growth area for us today,” Haas says. Kane has set up its own brokerage business, Kane Logistics, which offers freight services across the contiguous United States as well as Canada.

Haas and brother Pete, the company’s vice president of Twin Cities operations, work out of Inver Grove Heights; another brother, Pat, heads up Sauk Centre operations. The family has kept the business ahead of the pack by early adoption of technology, including e-logging, which allows dispatchers and managers to have real-time information about where shipments are. Customers can log on to the Kane website to get information on where their loads are, Haas says. “Not many competitors our size or smaller have that capability,” she notes. Being on time—and even ahead of time—is what keeps this trucking company rolling.

In 2012, Kane Transport acquired Schilling Inc., a Chippewa Falls trucking company, seeing an opportunity to expand its fuel-hauling business into Wisconsin. Schilling had both a fuel and a flatbed business; Kane wanted only the fuel side, but Schilling would only sell as a unit. “A little naively, we went into it thinking, ‘Hey, it’s transportation, we know transportation, so sure, we’ll take it on,’ ” Kane Transport CFO Angela Haas recalls. It wasn’t quite so simple, as Kane had to learn how to work with freight brokers rather than directly with customers. But “we had a couple of people in place who really understood that business,” Haas says. “And since last December, it has really taken off for us.” The company’s 15 flatbed trucks mostly haul construction materials, though in October, “we hauled a load of beer from Anheuser Busch.”