Recessions are just another opportunity for this building technology installer to grow.
April 01, 2020 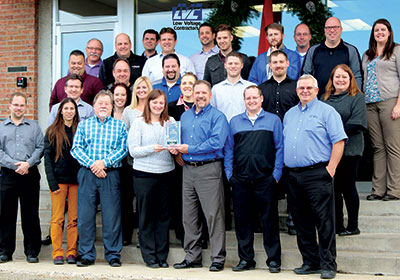 Low Voltage Contractors (LVC), an Edina-based provider of commercial-building technology systems, has a knack for prospering during recessions.

Take the recession that followed the dot-com bust and 9/11 terrorist attacks. Instead of pulling back the reins and waiting for the economic clouds to clear, LVC took a look at the stagnating construction market and did something.

“Our revenue actually grew because we looked at the market and realized that even though nothing was being built, all these buildings have systems in them that need repairing or replacing,” CEO Bob Hoertsch recalls. The company invested heavily in the retrofit and service market. “We got out of the markets where dot-com money had been and went to the markets where the money was still [there].”

LVC offers what it calls a total technology systems approach to clients in an array of industries including government, property management and education. That might mean anything from structured cabling to audio-visual equipment to soundproofing. Its products include fire suppression in computer rooms, nurse call systems for hospitals and nursing homes, and structured cable—phone, data, fiber backbone—for buildings of all kinds.

Since the late 1990s, the company’s specialty has been integrated security systems that include such capabilities as security card access, video surveillance and paging. The company’s latest addition is a sprinkler system for building owners. Recent projects include the new Hampton Inn Downtown Minneapolis and Mayo Clinic Square.

“We don’t concentrate on a single vertical market or product line,” Hoertsch says. “Not only do we sell, install and service everything we do, but we can also design and engineer for customers.”

The Minneapolis office of commercial real estate giant CBRE has worked with LVC numerous times over the past 15 years or so, mostly to install or upgrade fire alarms in CBRE properties. “They’re just a great service company,” CBRE regional facilities manager Robert Lyons says. “They always deliver on our expectations and they’re one of our highest-quality vendors.”

Currently, LVC’s fastest-growing segment has been integrated systems offering clients an all-in-one package of card access, structured cable, networking, video and paging into one platform. That component has gone from making up about one-tenth of the company’s sales to about half. “It’s a combination of systems that work well with each other,” Hoertsch says. “As the world gets more dangerous, that segment is almost mandated, not only by government but also insurance companies.”

Speaking of integration: LVC has been employee-owned since 2008, and all of the company’s stock was turned over to the ESOP two years ago. “Every employee is an owner,” Hoertsch says. “They can see their stock growing as the company grows.”

The recent recession was a recap of LVC’s performance in the dot-com bust—with little new development, it pursued remodeling and retrofitting. “By being proactive and diverse, LVC was able to continue growth in a down economy,” Hoertsch says. With the economy improving, he notes, “we’re still growing.”

Low Voltage Contractors has been doing some buildouts itself. In 2015, it opened an auxiliary office in Rochester. Long a good market for the company, Rochester promises even more work as the Destination Medical Center gears up. Six years earlier, LVC opened its second office, in Tempe, Ariz. The location was in response to a client that had extensive holdings there and wanted LVC near their facilities. That office has since expanded to twice its original size.