A trade show exhibit designer reinvents itself as a creator of retail environments for major brands.
April 01, 2020 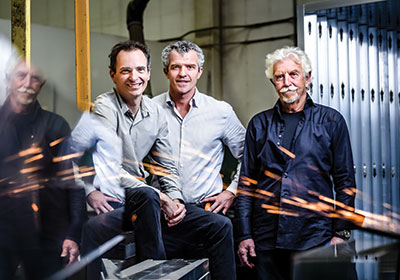 When the faltering economy cut the number of Chandler Inc.’s projects in half, the Afton-based retail display design firm and manufacturer was better positioned than some to weather the recession. Being fiscally conservative helped, but Chandler’s leaders knew they had to expand its client base and capabilities to survive and grow.

It found the opportunity to do just that—thanks to one of one of the firm’s first clients. Harvey Chandler founded the company in 1982 when he left his position as an engineer and trade show exhibit designer to start his own design company. (Bayport-based Andersen Windows and Doors was one of its first customers.) Early on, in addition to the trade show booths and exhibits, Chandler designed (and, in time, manufactured) displays and showrooms for Andersen Windows’ dealers.

Twenty years later, Andersen launched Chandler into a bigger world of both retail and manufacturing, when it became the top window and door supplier at Home Depot. “All of a sudden, Home Depot was opening 200 stores a year,” says John Chandler, Harvey Chandler’s son and now the company’s president. “So we had to really grow our manufacturing ability to produce higher volume and manage [manufacturing] inventory.”

Chandler was able to translate that new capability into a new line of business—retail environments that build not only sales but also brand identities. They can be showrooms, stores within stores, or full-store designs. Among the numerous major brands it now works for is Sony—Chandler has built its retail environments inside Best Buy stores. Chandler also has developed a store-within-the-store for Gander Mountain’s high-tech hunting and fishing gear. In addition, it has co-designed several of Under Armour’s new branded stores, including the prototype in Baltimore and the flagship in Chicago.

These expanded capabilities required Chandler to change the way it does business. It moved away from word-of-mouth marketing, hired a salesperson to work specifically on business development and landed a creative director to oversee the increasingly diverse design work. “Our strong in-house creative team differentiates us from other fixture and millwork-type shops,” John says.

Clients appreciate those distinctions. “I’ve seen their business evolve to bigger and better facilities with new capabilities on both the ideation and design development end to the production and fulfillment end,” says Michael McMurchie, Andersen Windows’ retail and visual merchandising manager, who has worked with Chandler for 16 years.

Chandler’s business continues to evolve. With an eye to growing the retail market, the company’s strategies include expanding internal operations, increasing manufacturing floor space, developing and growing talent, and investing in technological platforms such as cloud-based CRM and 3D modeling programs. (Chandler still designs and builds trade show exhibits and spaces—it’s about 10 to 15 percent of its business.)

“For the next few years, the goal is to continue to build the infrastructure and be very focused on which retail brands line up with our core capabilities,” John Chandler says. In a sense, Chandler Inc. itself has become a brand—one that retail brands are seeking out.

To get an idea of Chandler’s broad creative capabilities for its retailer clients, consider its recent projects for seven Chicago-area Whole Foods stores. Collaborating with Whole Foods’ Midwest design team, Chandler is helping create distinctive interiors for each store, designed to reflect the neighborhood in which it’s located. At the Streeterville store on the city’s Near North Side, Chandler and Whole Foods created an “Old Chicago” design with tin ceilings and old-fashioned tables with hickory turned legs for candy and cookies. At the store near DePaul University, the design incorporates reclaimed gymnasium flooring from a local school, projecting a feel both scholastic and youthfully hip.