A thriving player in television channels its perseverance and strong stomach.
April 01, 2020 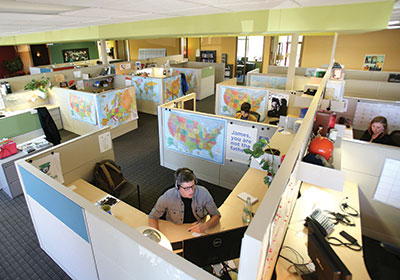 In May, Eden Prairie-based Tremendous! Entertainment filmed the 200th episode of Bizarre Foods with Andrew Zimmern. (The episode was broadcast in October.) It’s the production Tremendous! is best known for, as it’s been on the air for more than nine years—the longest-running series still in premieres on the Travel Channel.

Colleen Needles Steward, the television production company’s founder, can tell you it wasn’t easy to get that first episode made. But when she launched Tremendous! in 1996, she was driven. After 14 years in broadcast news working as a reporter and anchor, she yearned to engage audiences with more detailed, long-form storytelling. Nearly 20 years later, Steward sits at the helm of a prolific and profitable company with more than a dozen shows on TV or in production. Eden Prairie-based Tremendous! now has the ear of television executives across the spectrum.

Steward launched her company to delve deeper into stories that open windows into different cultures. Programming from Tremendous! aims to be positive, uplifting and family-friendly, highlighting people who are passionate about their world, their work and making a difference. Tremendous! develops a full slate of programming for a variety of networks, including Rock the Park on ABC, which features adventures in national parks, and Ghost Asylum on Destination America, where a team hunts down paranormal activity in abandoned mental hospitals and asylums.

Launching a new production company—one based in Minnesota, far from the entertainment centers of the coasts—“was a slow start, and it takes a while to break into the business,” Steward recalls. “In the early days, we were trying to keep the doors open. We accepted projects other than entertainment—industrial videos and commercial work. Now we’re able to focus entirely on entertainment.”

In 1996, Tremendous! caught its first big break: Animal Planet bought Once Upon a Tree, a show Steward developed to teach preschoolers about nature, using puppetry. Cable channels were becoming increasingly open to “unscripted” programming, which was the kind of show Steward and Tremendous! wanted to create.

Then, in 1999, a mutual friend introduced Steward and Zimmern. Networks were skeptical that viewers would want to watch a chef from Minnesota eat strange food, but Steward persevered, and after three years of pitching the show received a green light from the Travel Channel.

“In an industry full of creatives, Colleen understands how to sell and get paid, while taking care of customers and giving them what they want,” says Tremendous! board member Greg Frankenfield, CEO and co-founder of Magenic, a Twin Cities-based software developer. “It’s been interesting to watch their growth over the past few years. The No. 1 reason is Colleen. She does a phenomenal job of putting together a team and getting the most out of them. She’s a genuine, honest, straightforward person, and people trust her.”

Though Tremendous! now has an office in New York (which focuses on program development) and Los Angeles (centered on production), Eden Prairie remains the company’s headquarters. And that’s where Steward wants it to stay.

“In order to be in this business and run your own business, you have to have a strong stomach and to take risks,” she says. “You have to believe in yourself and the people who work around you. I think that’s been key for me. I don’t fluster easily and I don’t get discouraged.”

Tremendous! Entertainment’s new hit show, Rock the Park, is its first production for a traditional broadcast network. ABC picked it up after it was launched on the CW. The idea for the program came from her son, Jack, and his friend Colton Smith, the show’s co-hosts. Son Tommy works on the field crew as the hosts go on adventures in the national parks. In April, Rock the Park won a Daytime Emmy for Outstanding Travel Program, as well as a Parents’ Choice Award.