This architectural millwork company has carved out its niche—and doubled in size in the past seven years.
April 01, 2020 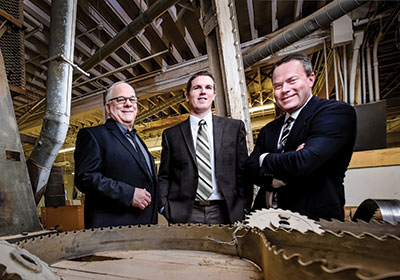 Jason Horner, owner and president of architectural woodworking firm Aaron Carlson Corp., is pointing out the carefully labeled bullet holes his team has shot in a sandwich made of wood and bulletproof Armortex.

The Minneapolis-based company created the sandwich as a way to make doors for a remodeled St. Paul home. “The whole house is armored: ballistic glass, plated interior walls,” Horner says. “But it’s on the historic register, so the house can’t change its appearance, a rule that includes its very heavy 1800s doors. The owner’s security company looked for someone who would build a ballistic wood door and frame. No one else was doing what they needed, and we said ‘This isn’t that hard—we can figure it out.’ ”

Bulletproof doors aren’t Carlson’s bread and butter, but they are an example of the thinking that’s gotten the company through the recent recession. The firm’s core is in custom architectural woodwork, highlighted in the remodeled Ordway, as well as the Guthrie Theater, Ameriprise Tower and Wells Fargo Tower, and homes worth $2 million or more.

When the recession hit, Carlson was a $12 million company that rarely did work outside the seven-county metro area. Horner anticipated that the downturn would hit the business hard, so the company expanded its geographical reach and offerings. “I spent the better part of six months a year on the road developing relationships with people we knew from Minnesota who had moved,” Horner says. Now Carlson works in Chicago, on the East Coast, Las Vegas and St. Louis, in addition to the Twin Cities.

While branching out, Carlson held tight to its reputation for craftsmanship. “We look for partners to play a key role in achieving a high-quality project that exceeds our customers’ goals,” says Nick Kaminski, a senior project manager for Minneapolis-based Ryan Cos. U.S., who has worked with Carlson on commercial construction projects for nearly 10 years. “I can count on Carlson for high-quality craftsmanship and also for honest communication throughout the process.”

Seven years later, Carlson’s annual revenue is about $25 million. “We are the last one standing with any real capabilities in terms of ability and people,” Horner declares. Aaron Carlson is one of the few remaining firms with employee skills to combine art, wood and construction. This fall, it began work at the State Capitol, where it’s building new interiors and consulting on historical renovation. It was also wrapping up work at the Mall of America JW Marriott Hotel, where its workers have done $4 million in millwork interiors since June. “It was significant and painful for us to get through it that fast,” Horner says, “but we did it, and it means that we can focus on big projects.”

Those bulletproof doors aren’t a big part of the business, but they could be. “Where we see the market is in places where people don’t want anyone to know that it’s a ballistic door: schools, police, principal’s offices,” Horner says. In mid-October, he was making plans to demonstrate the new product. “Someone [will be] shooting at a door that’s made like this, with me on the other side,” Horner says. “We’ll say something like, ‘We stand behind our doors.’ ”

If you’re driving on Central Avenue near Broadway in Northeast Minneapolis, you can’t miss the tall smokestack with the words “Aaron Carlson” running down the side. The company has been at that location since 1895, four years after the millwork company was founded. Owner Jason Horner’s parents bought the company in 1995; Horner became president in 2007. While the Northeast building remains the company’s headquarters, Aaron Carlson also has opened production facilities in Morris and in Baldwin, Wisc.