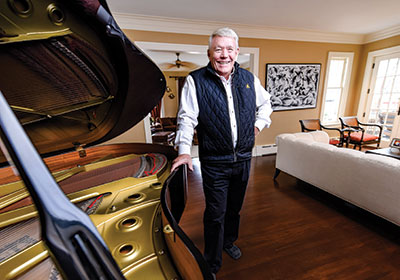 Steve Havig, who launched Lakes Area Realty in the basement of a bakery at 28th and Hennepin in Minneapolis, says people call him “the accidental broker.”

After nearly three decades on the road as a wholesale apparel salesman, Havig and his wife, Terri, decided to settle down and open a bakery and coffee shop called Isles Bun & Coffee. A few years later, as he recalls, Terri said to him, “ ‘You know, with your personality and the way you like to get people a deal, you should be a realtor.’ And I said, ‘Oh, God, I don’t think so. I just really don’t like that profession at all.’ ” Some of the realtors he’d worked with as a seller and a buyer “left something to be desired.”

But Terri persisted, and in 1995 her husband finally gave in, taking real estate classes at night and baking cinnamon rolls during the day. After earning his license, Havig worked for brokers at a few agencies before hanging out his own shingle with two friends.

As it turned out, Terri Havig knew what her husband was good at. This year, Lakes Area Realty’s projected revenue is more than $100 million. Lakes has succeeded by carving out a niche amid much larger competitors, specializing in properties in the lakes neighborhoods of Minneapolis. The company has an office in Excelsior, which focuses on Lake Minnetonka, and others in Golden Valley, Prior Lake, Montrose and New London/Spicer. The average median home sale in the Twin Cities is $220,000; the average median for Lakes Area Realty is $289,000.

It’s been 20 years, and Havig realized he had a knack for helping people in high-stress change situations. “I found out that it was fun and interesting, and if the deal was good, the money followed,” Havig adds. “Never did we put money ahead of the best deal and situation for the client. That put us in a referral situation, and from there we built the business.”

What’s more, he has a deep understanding of the area based on his experience as a resident, a property investor and a business owner. “We have neighborhood knowledge, neighborhood connections and really good neighborhood referrals,” Havig says. “It’s easy to compete when people trust you and you know what’s going on in the neighborhoods you’re selling.”

Marshall Saunders says his friend has succeeded simply by being himself in a competitive market. (Saunders is partners with Havig in crowdfunding venture Saunders Dailey, an investment pool that buys large properties and shares partial ownership through dividends.) “He’s just a regular guy,” Saunders says. “Even when he’s selling a multimillion-dollar home, he doesn’t put on airs, drive certain cars or dress in a way to make you understand how successful he is. I think that genuine quality really attracts people to him.”

Steve Havig ran his real estate agency for several years in the basement of the bakery he owned with his wife, Terri, Isles Bun & Coffee—he referred to it informally as Under the Bun Realty. They sold the bakery in 2002 and opened a Lakes Area Realty office next door. The two businesses now operate side by side on 28th Street just off Hennepin. Havig says that while he was still operating the real estate business out of the bakery, he kept his listings on the counter for customers.