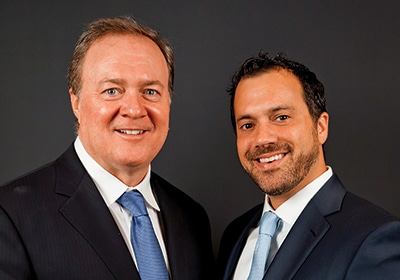 Josh Hochschuler started Talenti Gelato as a storefront in his hometown of Dallas but quickly got out because, as he says, “it put a horrible taste in my mouth.”

Two years into the venture, he felt his gelato business was dictating his life. He needed a change of pace, but didn’t want to abandon his new company. Before his gelato business, Hochschuler made a living as a banker in Argentina. The owner of his favorite gelateria there apprenticed Hochschuler, training his palate and schooling him in traditional methods to craft impeccable gelato.

In 2007, he was servicing restaurants and hotels exclusively. He closed his store and went into distribution, but he recognized he needed help to organize and grow his business. Within a year, Hochschuler (at right in photo)connected with businessman Steve Gill, whom he met through a college friend, and formed a partnership with Gill that proved to be tremendously beneficial.

From the outset, Gill laid out a strategy: to begin with the end in mind. The plan was to sell Talenti to Unilever or NestlÃ©, the two largest ice-cream makers in the world. Gill and Hochschuler reconstructed aspects of the Talenti brand—including packaging and ingredients—with the eventual goal of reaching $100 million in annual revenue.

“Every year [since 2008], we have grown the business by at least 50 percent,” says Gill, confidently adding: “I believe in 12 years time, Talenti will be the most valuable ice cream brand in the world.”

The pair have accomplished everything they set out to do, and then some. Talenti smashed expectations with a $160 million sales year in 2014, the year it was sold to Unilever. Today, Gill asserts, Talenti outsells its main premium ice cream competitors—HÃ¤agen-Dazs and Ben & Jerry’s—dollar for dollar.

“We just entered drugstores,” says Ryan Bennett, Talenti’s CFO for the past four years. “International is the next big hurdle.”