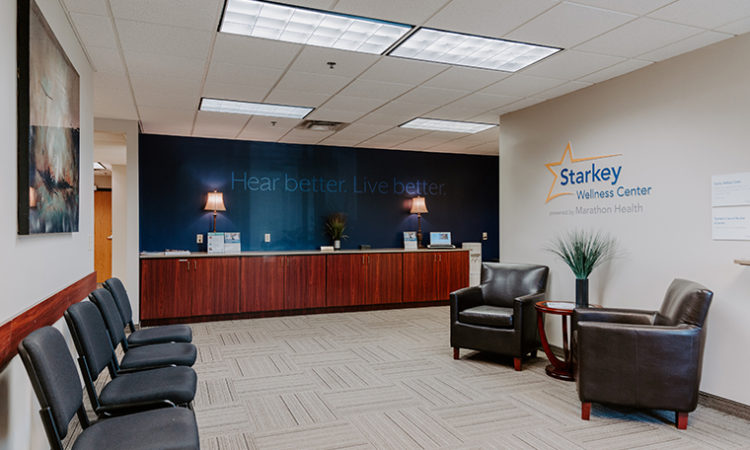 The new center will be operated by Marathon Health. (Photo courtesy of Starkey)

As part of the launch, Starkey has rebranded its existing onsite clinic.
By Dan Niepow
September 18, 2019

As part of the launch, Starkey has rebranded its existing MyCare clinic, which will now bear the Starkey name. Vermont-based Marathon Health has inked a three-year contract to operate the clinic.

Starkey has also opened its 5,000-square-foot gym to all its workers. Previously, the gym was available only to employees participating in the company’s “StarFit” fitness program, which has been in place for five years.

The wellness center is designed to bridge the gap between the clinic and gym. For chief human resources officer Jeff Krautkramer, it’s all part of a more holistic approach to employee wellness.

“Sometimes you have to meet employees where they are,” he says, noting that Starkey employees about 1,600 people at its Eden Prairie campus. “If you think about all the time lost from going to the doctor for preventive care, it can be a huge productivity hit.”

The center features two full-time physician assistants who can provide general wellness exams and dispense some medications. The clinic includes two exam rooms, a lab, and a conference room.

Krautkramer sees the wellness center as a way to attract workers in a tight labor market.

“This is a differentiator … as we compete for talent in the med-tech industry,” he says. In the Twin Cities, the unemployment rate hovers around 3 percent.

The center will include a range of preventive health services. Over the next few months, Starkey aims to host events aimed at improving employee health. For instance, the company aims to offer mammograms onsite.

“Depending on the needs of the workforce, we can add on to that service model,” he says. The clinic could one day include behavioral health-oriented services, for instance.