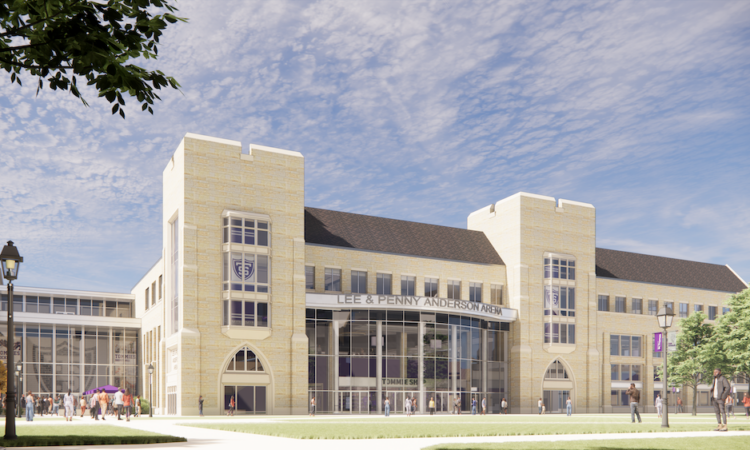 It’s the largest donation ever to a Minnesota university. Prompted by a move to Division I athletics, the Lee & Penny Anderson Arena will become home to hockey and basketball.
By Allison Kaplan
January 17, 2023

An unprecedented $75 million gift from billionaire philanthropists Lee and Penny Anderson will enable the University of St. Thomas to build an on-campus athletic arena that will become home to the Tommie hockey and basketball teams. It’s the culmination of St. Thomas’s 2021 move from Division III to Division I athletics.

“It’s a key component as we establish ourselves on a national stage,” UST president Robert Vischer told TCB in advance of Tuesday’s press conference to announce the plans. “We had outstanding facilities for Division III, but we have to take it to the next level for more national visibility, a stronger campus experience, and more proactive alumni engagement.” 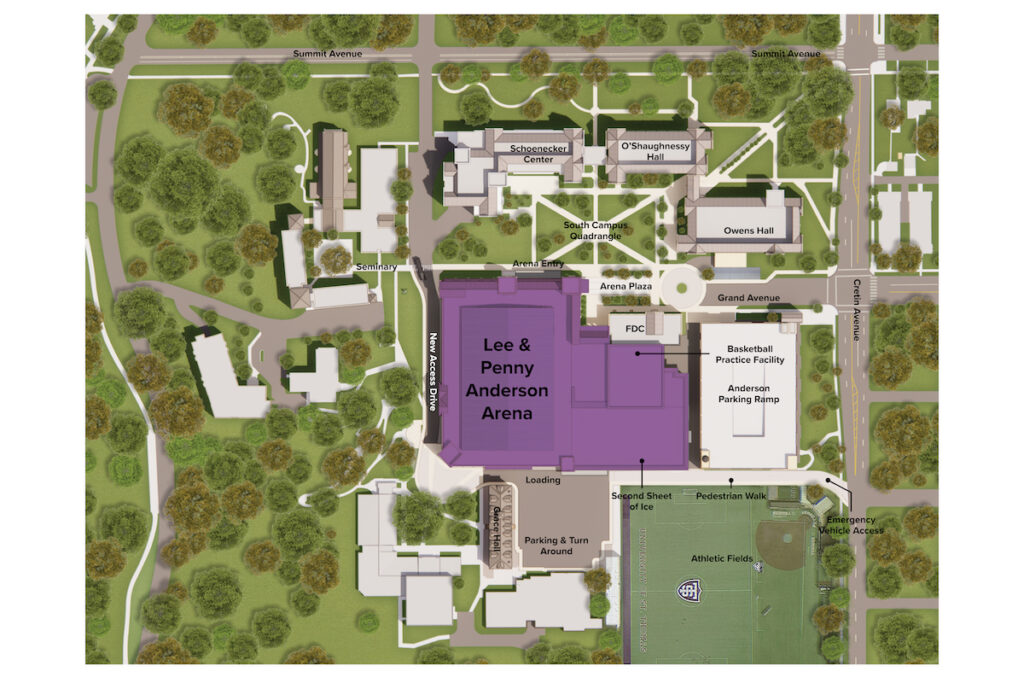 The Lee & Penny Anderson Arena will be built by Ryan Companies on the St. Paul campus, southwest of Summit and Cretin avenues. The new arena will replace three existing buildings: the McCarthy Gym, Cretin Hall and the Service Center. St. Thomas aims to break ground in 2024 with a target opening in fall 2025.

The Andersons’ $75 million gift is the largest single donation ever received by a Minnesota university, a St. Thomas spokesperson said. Still, it will not cover the entire bill for the new sports facility, which is estimated to cost $143 million; $175 million if you count demolition costs for razing the three buildings it replaces.

“We’re confident the rest will come,” Vischer said. “Our move to Division I athletics is generating more interest and new major donors.” The university is 60% of the way to its $131 million fundraising goal.

Of course, the Anderson name is already a fixture on the UST campus—the Anderson Student Center and Anderson Athletics and Recreation Complex are the result of a $60 million donation the Andersons made to the school in 2007. At the time, Lee Anderson was a St. Thomas Trustee. He’s the former CEO of New Brighton-based APi Group, provider of specialty construction, safety and industrial services like fire protection and pipe insulation. Founded in 1926 by his father Reuben Anderson, Lee Anderson grew the company through dozens of acquisitions, adding up to 40 companies under the APi banner. Anderson sold to publicly traded acquisition company J2 in 2019 for $2.9 billion.

A graduate of West Point Military Academy, Anderson’s affinity for St. Thomas goes back to childhood when he remembers priests from the school visiting his family’s cabin. “My dad was good friends with the priests there,” Anderson recalled in an interview with TCB. Although he grew up in Minneapolis, Anderson moved to St. Paul—where his father grew up—to raise his own family with wife Penny. They lived next door to another prominent St. Thomas benefactor, the O’Shaughnessy family. Anderson served 20 years on the board of trustees. His children went out of state for college, but three grandchildren are Tommies—one a recent graduate and two others are currently enrolled.

“There’s something about the young people at St. Thomas that really appeals to me—they’ve got a can-do attitude,” Anderson said, offering a similar description of the school itself. “I hear the word ‘transformational’ a lot. They’re taking a school that would have been just fine and making a quantum leap. I think the Twin Cities is going to be shocked by how well St. Thomas does.”

The new athletic center is actually not St. Thomas’s largest fundraising effort, the university’s recently appointed president Vischer was quick to point out. “Scholarship fundraising is our No. 1 priority.” The 2025 strategic plan set a goal of $300 million for academic and athletic scholarships and $100 million has been raised so far.

“All of higher education is under the microscope right now. Students and families are questioning the value proposition,” Vischer said. “We want to make sure we are ready to meet the hard questions about whether [a college degree] is worth it. We’re a Catholic university and we take the notion of vocation seriously. We help students discern how their gifts align with the world’s needs, and that needs to be true for us as an institution.”

Currently, 80% of UST undergrads come from Minnesota. Vischer said he’d like to grow outstate enrollment by 20%.

He pointed to the new Morrison Family College of Health as an example of UST’s future focus. “The nursing school is in its first year and already near capacity.” The Schulze School of Entrepreneurship is another key growth area, he said. “In surveys of young people today, entrepreneurship schools are high value. They want to use that as a catalyst, no matter what discipline they’re studying.”

But the reality is, nursing and business schools don’t attract the sort of visibility that comes from a winning basketball or football program.

“In American higher ed, it’s student experience, alumni engagement and national reputation. All three are wrapped up with a commitment to excellence in athletics.”

Athletic facilities play an important role in drawing both students and fans, added UST athletic director Phil Esten. “For student athletes, it’s where they spend their time. We’re thinking about how we can give them the best daily experience and make efficient use of their day.”

The new arena will include seating for 4,000 to 6,000 (depending how it is configured, for basketball, hockey or other events) plus an auxiliary ice rink and basketball courts for practice. After considering several options that would have taken the teams to new facilities off campus, Esten says he’s “thrilled to land on campus.”

Currently the St. Thomas basketball teams play at the Anderson Athletic and Recreation Complex, which has seating for around 2,000. The hockey teams share the St. Thomas Ice Arena with the St. Thomas Academy high school program, and capacity is limited to 1,000.

Scheduling men’s and women’s hockey and basketball in the same arena will present some “complexities,” Esten said—although several other Division I schools rely on multipurpose centers. Still, he believes there will be ample opportunity for use beyond college teams. “There’s an ice shortage in the city–we’re glad we’ll be able to provide another sheet of ice in our community for club hockey, youth teams.”

Vischer agreed. “We think we’re going to fill a need. We want this to contribute to the city of St. Paul.”