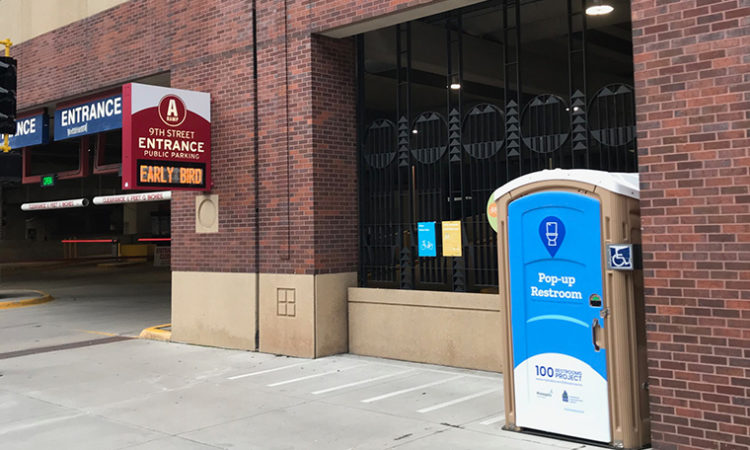 Everyone has to use the bathroom. And as homelessness has increased in the region, so has public urination. In October, following an annual downtown cleanliness and safety perception survey, which ranked public urination a top issue, the Minneapolis Downtown Improvement District (DID) and the city introduced a new multiyear initiative to address the lack of accessible public restrooms.

Called 100 Restrooms and similar to projects in cities like Austin, Texas, the city is installing portable restrooms throughout downtown; it also calls for collaboration with private businesses, asking them to open their bathrooms to noncustomers.

The initiative, though designed to serve visitors as well, has been controversial, since the downtown denizens with the least access to a bathroom are homeless.

“My basic premise is that there are people who need to go to the bathroom, which is relatively simple,” says John Sweeney, owner of Hennepin Avenue’s Brave New Workshop Comedy Theatre. “I grew up on a dairy farm, and if something needs to be done and there’s a way to do it, you get it done.”

Sweeney has opened his restrooms to the public and allowed the city to put a portable outside his back door.

Sweeney understands that businesses have concerns about liability. Anything that happens in the restroom is the responsibility of the business owner. Then there’s the additional cost of cleaning and stocking the bathroom, as well as the experiences of customers who may have to wait to use it.

But Sweeney believes the only way to find a solution to any problem is to experiment. “I don’t have the answer to the homeless problem or the bathroom problem or the crime problem, but I do know that if we just continue to only talk about it, nothing is ever going to get done.”

It’s a learning experience for everyone involved, says Ben Shardlow, director of urban design for DID and the Downtown Council. “We’re using this as an opportunity to have a dialogue that we feel has been missing about the topic, and we love hearing people’s concerns.”

At 2019’s end, the DID did not have a solid count of the number of toilets open to the public downtown.