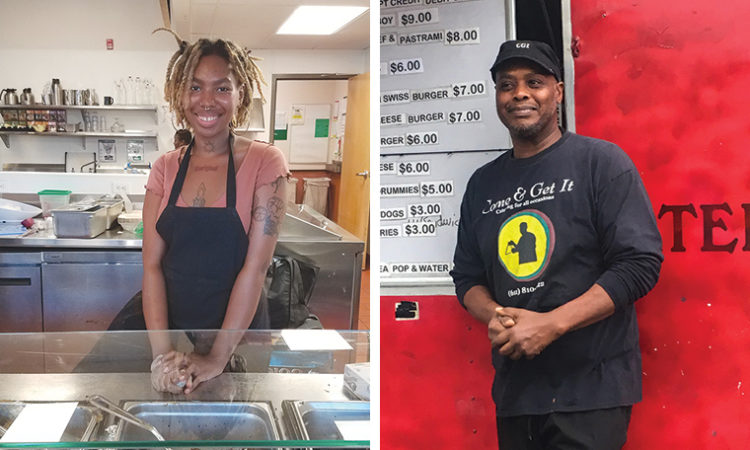 Entrepreneurs (right) Kenny Jordan of Come and Get It Food Trailer and (left) Mykela Jackson of Keikoâs Kitchen participate in The New Market.

Nationwide, African American buying power has reached $1.2 trillion, a Nielsen study found. Yet, only two cents of every dollar a Black American spends goes to black-owned businesses. It’s even worse in Minnesota: The latest available data from the Minnesota Department of Employment and Economic Development in 2012 reports that the state had fewer than 20,000 Black-owned businesses in the entire state.

The New Market is working to keep dollars circulating in the Black community. The organization holds pop-up markets selling goods of all kinds in various locations around the city. The New Market comprises only Black-owned businesses, most of which are from North Minneapolis, a neighborhood with a nearly 50 percent African American population. Yet, the neighborhood itself has few independent vendor markets; of the 29 farmers’ markets in Minneapolis, for example, only two are in North Minneapolis.

The New Market is a collaboration between the Northside Economic Opportunity Network (NEON), a nonprofit working to expand economic development opportunities and build wealth among low- to moderate-income minority entrepreneurs in North Minneapolis, and Appetite for Change, a Minneapolis nonprofit that uses food as a way to build health, community, economic, and social change. Both have been working for years, often in collaboration, on a variety of projects that support and raise awareness of Black-owned businesses in North Minneapolis.

Katie Myhre, Appetite for Change’s former food business development manager, came up with the idea for The New Market.

“It’s really hard for any new business to launch into a market, regardless of who they are or where they come from,” Myhre says. Resources and networks for entrepreneurs are often fairly exclusive and difficult to break into, she adds. For minorities and certain communities, it can be even tougher.

Currently, North Minneapolis early-stage businesses and/or those without brick-and-mortar locations have to take their businesses outside the neighborhood in order to sell. That’s daunting, Myhre says, and not always possible. Plus, it takes the dollars out of the community.

“North Minneapolis has great businesses,” Myhre adds, “but they’re just not getting the same opportunities as other businesses in other neighborhoods.”

Myhre heard about the Village Market in Atlanta, which curates huge vendor markets featuring Black-owned businesses and facilitates a network of Black entrepreneurs, and she wondered if something similar might work for North Minneapolis.

So last spring, Myhre applied for a grant from the City of Minneapolis’ Great Streets Program. Great Streets gives money to nonprofits working to revitalize areas through business development.

As of mid-December, The New Market had already held three successful markets and was planning more. Participating vendors offer everything from food to art, fashion to body products.

While Appetite for Change helps facilitate the physical markets and offers its commercial kitchen space in North Minneapolis to food vendors at a discounted rate, NEON coaches the businesses in finance, marketing, and other business topics.

“[NEON] is really at the heart of this work, supporting those business owners and getting them ready for the market and beyond,” Myhre says.

If you build it…

Julia Moturi has participated in two The New Market events so far. She credits NEON with helping her get her health food business, NYUM Plant Kitchen, off the ground by training her in business. But what she’s getting out of The New Market itself is, perhaps, even greater.

“The sense of community among all the different businesses has just been really beautiful,” Moturi says. “I feel like we’re all supporting each other to have successful businesses.” They even help each other prep for pop-ups, she says.

That’s exactly the type of experience Myhre hoped the venture would promote.

Myhre herself is no longer closely involved with The New Market project; she’s participating in the Finnovation Lab startup accelerator with her other startup. Meanwhile, Appetite for Change is planning to hire Alysha Price, a black woman and nonprofit founder. “[Price] reflects the community a lot more than I do,” says Myhre, who is white. If this is about community, she says, then having someone from the community in the role is important.

The Appetite for Change team hopes that The New Market can eventually have a more permanent physical space. The group conducted a feasibility study and is working on a budget.