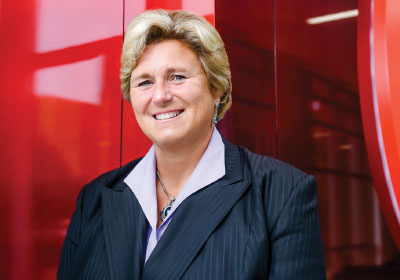 With Boudreaux at its helm, Anthem will become the second-largest company run by a woman in the U.S.
By Sam Schaust
November 06, 2017

Anthem, the nation’s second-largest health insurer, announced Monday it had chosen a former executive from its foremost competitor, UnitedHealth Group, to be its new chief executive officer.

Gail K. Boudreaux, age 57, is set to take the lead at Indianapolis-based Anthem on November 20.

Boudreaux was the CEO of UnitedHealthcare, a subsidiary of Minnetonka-based UnitedHealth Group, from January 2011 to November 2014. While there, she was responsible for $120 billion in revenue and managed 60,000 employees, Anthem said. During her tenure, membership grew by more than 8 million.

Months after leaving the country’s largest insurer, she founded and became the CEO of GKB Global Health, a health care strategy and business consultancy out of Illinois. Boudreaux also carries executive experience from major insurers Blue Cross/Blue Shield and Aetna.

Last year, Boudreaux was one of five business leaders given an Outstanding Directors Award by Twin Cities Business. Boudreaux specifically was honored for the unique insights she brought from the consumer health sector to utility company Xcel Energy as a board member. For several years, she has also served on the boards of health care companies Novavax and Zimmer Biomet.

With Boudreaux at its helm, Anthem will become the second-largest company run by a woman in the U.S. (General Motors, run by Mary Barra, outranks Anthem by revenue.)

Boudreaux will be replacing Joseph Swedish, who has been Anthem’s CEO since March 2013. Anthem began planning Swedish’s exit more than a year ago, according to the Associated Press. The succession plan includes Swedish transitioning to be executive chairman of Anthem’s board by Boudreaux’s start date. By May 2018, he will step down from the executive chairman role, Anthem said, and stay on as a senior advisor for two more years.

“Gail Boudreaux is widely recognized as a very successful executive in the health care industry,” said Swedish in a statement. “It has been a privilege to lead Anthem and work with our more than 53,000 associates across the nation. As we move ahead, I look forward to working closely with Gail in this new capacity.”

In the same release, Boudreaux said she was “honored” to be joining the company and would be moving with her husband to Indianapolis over the next few months.