Is the $1 billion apartment development market being driven by demand or a risky mix of hype and cheap financing?
By TCB Staff
October 01, 2013 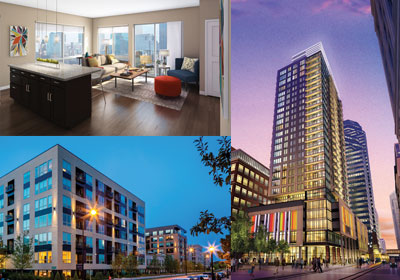 If local apartment developers have a current theme song, it would have to be “Welcome to the Boomtown.” In burgeoning areas like the North Loop in Minneapolis, home to Target Field and walking distance from the downtown core, residents are flocking to new buildings outfitted with pools, dog walks, rooftop gardens, bocce courts, and other fancy perks.

Construction cranes can be seen just about everywhere, with 3,100 new apartments slated to open this year alone, according to Brent Wittenberg, vice president with real estate consultancy Marquette Advisors. That’s more than any single year since Marquette began tracking the market in 1996. Most are considered luxury; another 5,200 units are to be completed next year, not counting student housing.

The 30 market-rate apartment projects underway in the Twin Cities are bringing in an estimated $1 billion to the local construction industry, while feeding an apparently insatiable appetite for high-end living that requires no property ownership, and shows no signs of letting up. Minneapolis continues to rank among the strongest apartment markets in the country. Yet some market observers are beginning to watch the cranes with concern. Real estate has always been a cyclical business prone to periods of boom, tapering development, bust, and stabilization. And there are already signs that not every planned apartment project will be built after all.

The billion-dollar question of the moment: If residential real estate development is the ultimate business roller coaster ride, full of exhilarating climbs and stomach-churning drops—how long until the screaming starts?

There’s no clear answer, in large part because every developer is wired to believe that he is savvier than his competitors and he alone has the best site for a new project. If the market starts to struggle, he thinks his competitors may stumble, but that his project will be fine. And his confidence is bolstered by apartment market evangelists (many with a vested interest in prolonging the boom times) who continue to beat the drum for market growth, pointing to low rental vacancy rates, solid job growth, lender confidence, and brisk leasing at new buildings as signs that the market remains hungry for more new apartments.

At the same time, some observers look at the large volume of pending new, pricey units and say there’s simply not a bottomless supply of people who can afford to pay steep rental rates in new buildings. Real estate veterans recall that when the condo market crashed, work ground to a halt, investors and developers lost money, and some sites landed back in the hands of lenders.

“If you look over time, you see cycles in real estate,” says Toby Madden, regional economist for the Federal Reserve Bank of Minneapolis. Few new projects were built during the recent economic downturn and “rents started increasing, so that gave the signal to the marketplace to build more,” he says. “The big question right now is . . . will they overshoot on the supply side? Some people say ‘No, [because] we didn’t build for so long.’ A lot of people say we’re smarter than we were in the past.”

Downtown Minneapolis is ground zero for the apartment-building boom, with the most projects in the pipeline, and the majority of those apartments priced at the upper end of the market. Call them “luxury,” “upscale,” “high-end,” or just expensive.

Most rent for $2 a square foot, which translates to $24,000 per year—for 1,000 square feet. For example, the just-opened 222 Hennepin project in downtown Minneapolis, a 286-unit project that includes a Whole Foods grocery store, is drawing rents of $2.20 per square foot.

Such luxury prices make the overall downtown Minneapolis apartment market the most expensive in the metro area, with an average monthly rent rate of $1,340, at the end of June, according to Marquette Advisors. That’s 37 percent higher than the metrowide average of $979.

And demand continues to grow: The latest statistics from Marquette show that the pace of rentals is outpacing the completion of new apartments, which is keeping vacancy tight. The firm reported absorption of 2,142 apartment units during the first six months of the year, compared with 1,142 new units opening during the period.

But downtown Minneapolis also is where less positive omens are beginning to appear.

Chip Johnson, founder and president of Atlanta-based Turnstone Group, LLC, had a plan for a new apartment project on a surface parking lot at the corner of First Avenue North and Eighth Street, a half-block off Hennepin Avenue in downtown Minneapolis. His real estate investment firm, once based in Minneapolis, where it maintains an office, previously developed apartment projects including the Murals at LynLake in south Minneapolis, which was completed in 2008.

Johnson ultimately scrapped plans for the downtown project in late 2012. On paper, he says, the Twin Cities apartment market looks like it’s in great shape. But Johnson says the sheer volume of other competing projects, along with rising construction costs, was a cause for concern. 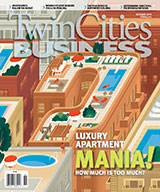 “What gave me pause is that we’re all in the same price point. To build new ,you have to be in that upper price point, because of the construction costs,” Johnson says. “Fundamentals still look strong, but there’s a lot of units coming online. When everybody’s looking at [the same thing] . . . you have to be a little careful.”

Instead, Turnstone struck a deal to sell its site to Golden Valley–based Mortenson Development, which has proposed a 210-room Hampton Inn on the site.

The Turnstone project is not the only place in downtown Minneapolis where an apartment plan has been shelved. Todd Phillips of Minneapolis-based TruCore Realty was pursuing a plan to convert the Plymouth Building, a vintage office building on Sixth Street east of Hennepin, into approximately 250 apartments. Industry sources now say that another group is looking to convert it into a hotel. (Phillips could not be reached for comment.) Wittenberg says Marquette Advisors is not counting the project on its list of proposed apartment projects.

And there’s one more twist: As the housing market begins to stabilize, a few developers see an opening for condos again.

Veteran developer Jim Stanton of Coon Rapids–based Shamrock Development is building Stonebridge Lofts, a brand-new 164-unit condo building in downtown Minneapolis near the Guthrie Theater. At press time, he said he had 89 presales and seven reservations; the building is set to open in spring 2014.

Did Stanton ever consider apartments at his site?

“Not too seriously,” he says. ““My read is, [with] the apartments, we might be approaching a bubble. We have an awful lot of them coming on in a short period of time,” Stanton says of the current rental market. “I decided to go where the competition ain’t.”

The Penfield
Originally proposed as a condo tower, the project now calls for 254 apartments and a Lunds grocery store in downtown St. Paul. The first residents can move into the Penfield in late November. The city of St. Paul is the developer.

The current apartment boom is being driven by a variety of factors, including the recent shakiness in the single-family home market, which has been plagued by foreclosures, depressed prices, and tight credit. In response, many flocked to renting.

Downtown Minneapolis was home to 36,500 residents as of February, according to the Minneapolis Downtown Council. The Council’s Downtown 2025 Plan calls for expanding the downtown population to 70,000 people and adding 15,000 housing units. Fortune 500 companies based downtown include Target, U.S Bancorp, Ameriprise Financial, and Xcel Energy.

In markets across the United States, says Jay Denton, vice president of research for Dallas-based Axiometrics, Inc., an apartment market research firm, investors have been drawn to downtown, rather than suburban, projects. Denton says investors think downtown apartments represent good long-range investments, bolstered by the trend of renters looking for convenient, emerging neighborhoods close to both work and entertainment options. “Really it’s about exclusivity of the neighborhood,” Denton says. “It has to do with where they feel values are going to hold up over time.”

“The institutional money has wanted to be [in the] urban core,” says Denton. “If the urban core does start to dry up, we could see a slowdown in multifamily construction in 2015.”

Job growth and apartment development are inextricably linked. Nationally, Washington, D.C., is being watched closely as a market at risk for a glut of new apartments. Denton thinks it is not creating enough new jobs to support the volume of apartments in the pipeline.

“[Developers and investors] look at Washington, D.C., and they get scared,” he says; worry about rising vacancies, lower investment returns, and a slowdown in future development. “It’s the one market where oversupply is really feared.”

In contrast, Denton sees the Twin Cities as a healthy apartment market, bolstered by solid job growth. But D.C. might have some parallels for the market here; the looming glut happened in part through a bullish rush to build new projects there, as the city fared better than most during the downturn.

“All of the sorts of institutional money looked to that market as a great long-term hold,” Denton says. “It’s one of the first markets around the country where we’re seeing the number of [apartment construction] starts starting to fall off.”