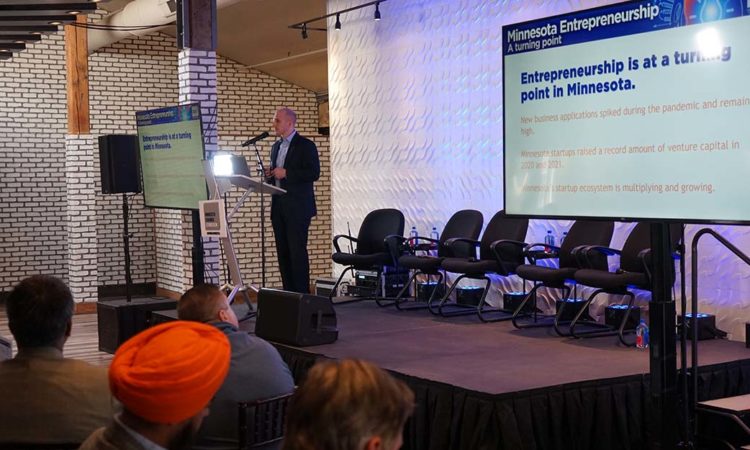 A new report from the Minnesota Chamber Foundation shows that Minnesota still ranks among the highest in the nation for five-year business survival.
By Dan Niepow
May 05, 2022

Minnesota may not necessarily be the startup capital of the nation, but it appears to be the place for new companies to survive over the longer term.

That’s one of the takeaways from the Minnesota Chamber Foundation’s “Minnesota Entrepreneurship” report released Tuesday. Citing data from the Bureau of Labor Statistics, foundation researchers found that Minnesota ranked first in the nation for five-year business survival in 2020. Minnesota also came in the top five in 2021.

“This is something that’s proved pretty durable over time,” said Sean O’Neil, director of economic research at the Minnesota Chamber and author of the report, at a presentation in northeast Minneapolis on Tuesday. “While less than half of businesses in the U.S. make it past their fifth year … the inverse is actually true in Minnesota, where our five-year business survival rate tends to be in the mid-50 percent range. This is a key strength for Minnesota’s entrepreneurial landscape, and something we want to protect.”

What’s more, startups in Minnesota end up creating more jobs than peers in many other states, according to the foundation’s report. That’s important to note because not every startup turns into a job creation engine; some end up being sole proprietorships without any employees, aside from the owner. That’s one of the reasons that the report distinguishes between “employer businesses” and “nonemployer businesses.”

Citing statistics from the nonprofit Ewing Marion Kauffman Foundation, the Minnesota Chamber report noted that Minnesota ranked 16th “in the time it takes for a new business application to become an employer firm.”

“Minnesota entrepreneurs are more likely to turn their ideas into businesses that employ others, and they make that transition faster than entrepreneurs in most other states,” the report stated.

Still, compared to other states, Minnesota ranked toward the bottom in terms of new employer companies started over the last two decades. From 2000 to 2019, Minnesota came in 40th for the number of new employer firms established. Topping off that list is a state you may not expect: Utah. Startup-heavy California, home to Silicon Valley, ranked seventh.

A state’s population seems to have a big impact on new business formation, which may explain Minnesota’s lackluster performance in that department. “Economic research on firm formation suggests that population growth is an underlying condition of entrepreneurship, creating both supply and demand-side incentives for new businesses,” the report stated. Over the last two decades, Utah had the second-highest population growth in the country – a fact that might explain why that state had such a high number of new startups over that time period.

Of course, a surge in population won’t necessarily lead to an immediate surge in startup activity. Nor will it ensure an equitable landscape for all entrepreneurs. Which is why the report also calls for improving access to capital for BIPOC entrepreneurs. While Minnesota startups have raised a record-breaking $1.5 billion in venture capital 2020, those funds have not been distributed equally. That’s not just along racial lines; geography also plays a role, according the report.

“Seed-funding may be particularly challenging for founders who lack access to the investor community,” the report stated. “Startups outside the Twin Cities metro and BIPOC founders often start at a disadvantage, lacking the personal networks that can provide trusted referrals to angel investors and venture fund leaders.”

To be sure, many of the state’s entrepreneurial support programs and ventures generally prioritize startups led by underrepresented groups, including BIPOC entrepreneurs, women, veterans, and businessfolk in Greater Minnesota. But the foundation argues that both the government and the private sector can do more.

The report does note a few other positive developments in the state, including the recent launch of venture capital groups Brown Venture Group, Bread & Butter Ventures, and Groove Capital. But again: If Minnesota wants a competitive advantage over other states, there’s always room for more such groups.

“Minnesota’s startup support stakeholders should continue the effort to recruit and build more VC funds in the state in coming years,” the report said. “Doing so could help propel Minnesota past a critical threshold and position the state as a Midwest alternative to crowded startup hubs in large U.S. metros.”