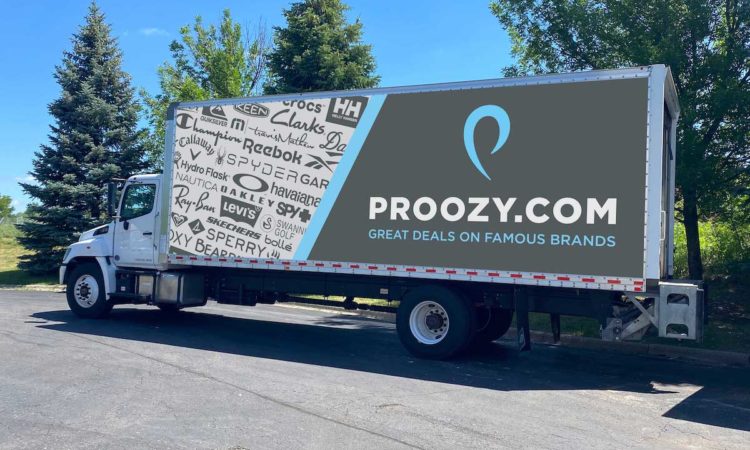 The e-commerce deals platform boasts more than 2 million users, but few Minnesotans know the company is based in Eagan.
By Allison Kaplan
July 06, 2021

Often a startup will try to build its fan base at home before making the leap to national. E-commerce discount shopping platform Proozy.com took the opposite tact. Now that its email list has surpassed 2 million shoppers, founder and CEO Jeremy Segal wants his community to know the fast-growing company is based in Eagan.

In a recent survey of Proozy shoppers, Minnesota ranked 27th among states for number of active users. “We’re trying to figure out a way to grow in our own backyard,” Segal said.

So the discount retailer is hitting I-494 in its new Proozy Gear Truck. From Lakeville to Minneapolis to Stillwater and back to Eagan, the truck shows up at breweries, softball tournaments, and summer festivals, stocked with athletic gear, shoes, accessories, and clothing—all priced to move. Proozy competes with Nordstrom Rack, T.J. Maxx, and Marshalls, offering discounts on brand apparel from Nike, Adidas, and many others. Unlike its big box competitors, Proozy is strictly e-commerce—emphasizing daily flash deals and relying on analytics to determine its inventory.

“I could sell 200 size small Adidas polos in a minute,” Segal said. “I know the right customers to send the offer.”

Driving up to a local event with a truck full of deals is a less predictable proposition, but Segal said the spectacle of it is drawing crowds. The truck has been on the road just a few weeks, posting its daily route and deals on Facebook. “It’s been a crazy success,” Segal said. “We have so many people who say I didn’t realize you were based here.”

Loyalty is particularly important at a time when acquiring overstock merchandise is becoming more competitive. “When the pandemic first hit, there was so much product, we got a second warehouse,” said Segal, who immediately started hiring. But very quickly last spring, manufacturers cut back and retailers cancelled orders. “Now, the product has evaporated, and we’ve had to get creative.”

Proozy, which built its audience primarily through name-brand athletic gear, has broadened its assortment to include home goods and electronics. The company is also making inroads with luxury brands including Louis Vuitton, Stella McCartney, and Gucci—high price powerhouses that don’t care to advertise overstock deals. Proozy is able to set up private sale pages, accessible only to targeted customers. “We know that we have 700,000 shoppers who say they want Louis Vuitton, for example,” Segal said. The only way to find those luxury deals is to subscribe to Proozy emails.

Proozy scored another win this year by holding onto Nike, which cut back on wholesale partners in recent months, in an effort to emphasize its direct to consumer business. Deals on Nike athletic shoes and apparel remain a top traffic driver for Proozy. “We know people aren’t going online and searching for ‘Proozy,’” Segal said. “They’re searching for brands, and finding, wow, you’ve got great deals.”

Segal said Proozy has added 50 new brands in recent months. But he doesn’t want to rely on other brand names entirely. Proozy will launch its first private label lifestyle brand this fall.

Listen now: Jeremy Segal shares the story of Proozy.com and his approach to e-commerce on this episode of By All Means podcast.