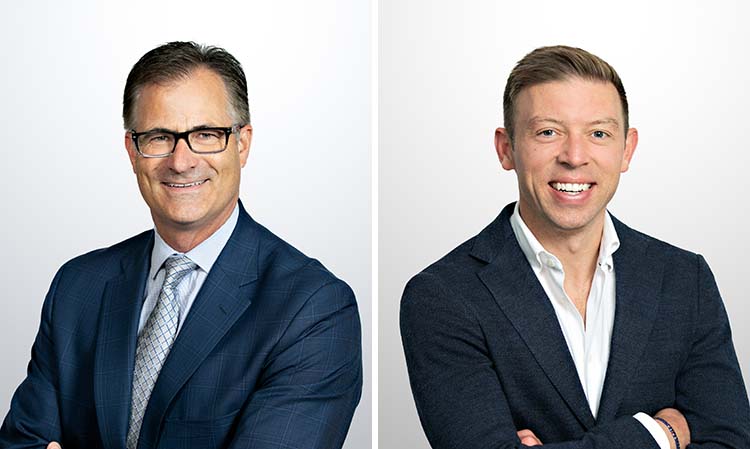 United Properties has tapped Matt Van Slooten (left) to serve as CEO and Chris Pohlad to serve as chief of staff.

Minneapolis-based United Properties, a major real estate investment and development company in the Midwest, will enter 2023 with new leadership.

United Properties on Wednesday announced Matt Van Slooten will lead the enterprise as CEO and Chris Pohlad was chosen to serve as chief of staff. The business is owned by Pohlad Companies.

The promotion of Chris Pohlad is the second time in three weeks that a grandson of the late Carl Pohlad is taking on a new and significant leadership role within a Pohlad-owned company. On Nov. 28, Joe Pohlad, a brother to Chris, was named executive chair of the Minnesota Twins.

Brothers Chris, Joe, and Tom, who most recently served as CEO of PAR Systems in Shoreview, are sons of Bob Pohlad. The three brothers were named to the TCB 100 in 2020 as emerging leaders in the Twin Cities metro.

Ben Hawn, president and COO of Pohlad Companies, said in a written statement that Van Slooten and Chris Pohlad will be charged with “collaborating with the [United Properties] team to prioritize business strategies, drive strategic growth, and continue their momentum as an investor and developer.”

Van Slooten, who came to United Properties in 2018, previously worked at Carlson Companies and CSM. Prior to his promotion, he served as president and portfolio chief investment officer at United Properties.

Pohlad joined United Properties in late 2017 after a five-year tenure with NorthMarq Capital, another Pohlad Cos. entity. Based in the Seattle office, he was involved in financing for commercial real estate developers and owners in the Puget Sound region. Pohlad earned a bachelor’s degree in politics and government from the University of Puget Sound in Tacoma, and he worked in politics before entering the business arena.

At United Properties, Pohlad was senior vice president and managing director of Amira. “Pohlad played an instrumental role in developing and launching the positioning and rebranding efforts of United Properties’ Senior Living Communities from Cherrywood and The Pointe to the Amira brand,” the company said in Wednesday’s announcement.

In his chief of staff role at United Properties, Pohlad will be a member of the strategic leadership team and an advisor. The company said he’ll continue oversight of the Four Seasons hotel and hotel operations.

Pohlad’s father, Bob, and uncles Bill and Jim were recognized Dec. 8 as TCB’s People of the Year for their long-standing commitment to downtown Minneapolis and their leadership in philanthropic giving.

William Katter long has been associated with United Properties. After a two-decade career with the firm, he recently left his position as president and development chief investment officer of United Properties Development.

Before his departure, he was honored in September with the President’s Award from the Minnesota Chapter of NAIOP, the Commercial Real Estate Development Association.