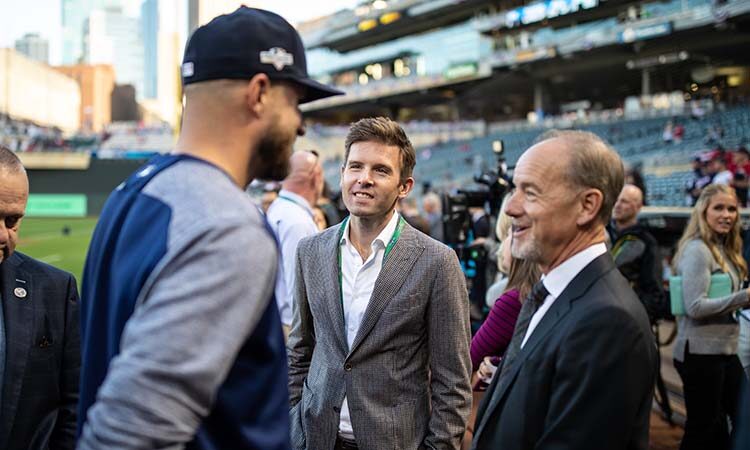 Joe Pohlad was in grade school in 1991 when the Minnesota Twins last won a World Series.

On Monday, his uncle Jim Pohlad passed the leadership baton to him and Joe, 40, was named executive chair of the Minnesota Twins.

Well-known banker Carl Pohlad bought the Minnesota Twins in 1984 and his son Jim long has been the top-ranking Pohlad in the baseball organization. Jim Pohlad has answered the tough questions from the media and fans about the Twins performance, payroll, and choice of manager.

Jim, 69, is not walking away from the Minnesota Twins. But he is sharing his leadership responsibilities with his nephew Joe, a son of Bob Pohlad.

“While I will personally remain involved in Twins and Major League Baseball business as the control owner, I am transitioning day-to-day Twins leadership responsibilities to Joe Pohlad,” Jim said in a Monday memo to employees. “Effective immediately Joe will assume the role of executive chair and will provide leadership to all facets of the Twins organization on behalf of the Pohlad family.”

Jim noted that Joe has been a member of the Twins front office staff for the past 15 years. “Joe has grown as a leader while building impactful relationships across the organization,” Jim Pohlad wrote in the memo. At the time of his promotion, Joe Pohlad’s title was executive vice president of brand strategy and growth.

The Twins franchise is one of the highest-profile family-owned businesses in Minnesota.

“My father Carl Pohlad purchased the Twins in 1984 with a sense of civic responsibility and a belief that baseball—more than any other sport—truly brings community together,” Jim Pohlad wrote in the memo. “Four decades later, our family continues to embrace that belief, and remain fully committed to owning the Twins for years to come.”

Jim Pohlad said the family’s goal has been to provide “strong and stable stewardship” of the Twins franchise.

On Dec. 8, Jim Pohlad and his brothers, Bob, 68, and Bill, 67, will be recognized by Twin Cities Business as 2022 People of the Year. The brothers are being honored for their commitment to rejuvenate downtown Minneapolis and to alleviate poverty and bolster racial justice.

Pohlad Cos. moved several of its businesses to the RBC Gateway tower. The new 37-story distinctive structure was built by United Properties, a Pohlad subsidiary. The Pohlads also are being recognized for their philanthropy.

Joe Pohlad serves on the foundation board with his father Bob and uncles Jim and Bill. Joe and his cousin, Kiki, were the first members of the third generation to serve on the family foundation board. Joe earned his bachelor’s degree in communications from Stonehill College, a private liberal arts college in Massachusetts.

Since joining the Twins organization in 2007, Joe has worked in a variety of positions that included marketing, communications, baseball, and operations. He became CEO of Go Media in 2015. In that role, he led the transition of Go 96.3 from a classic rock and Twins baseball format to modern alternative. He also launched a modern hip hop station in 2016.

Alongside his brothers Chris and Tom, Joe was named to the TCB 100 in 2020 as an emerging leader in the Twin Cities metro.

In a 2019 TCB interview, Bob Pohlad said that he and his two brothers have ownership stakes in Pohlad businesses that are “absolutely equal.” With that structure, Bob said, “no one brother has any greater decision-making authority than another brother.”

Three years ago, Bob said that the Pohlad Cos. had recently formalized a management structure to clarify leadership roles.

“This is an effort to ensure that what has been a cohesive, successful, and happy family business continues to be that,” Bob told TCB. He emphasized that he and his brothers wanted to smoothly integrate the third Pohlad generation into important roles.

“A lot of families screw that up,” Bob said. “We are trying to do our best to not have that happen to us.”