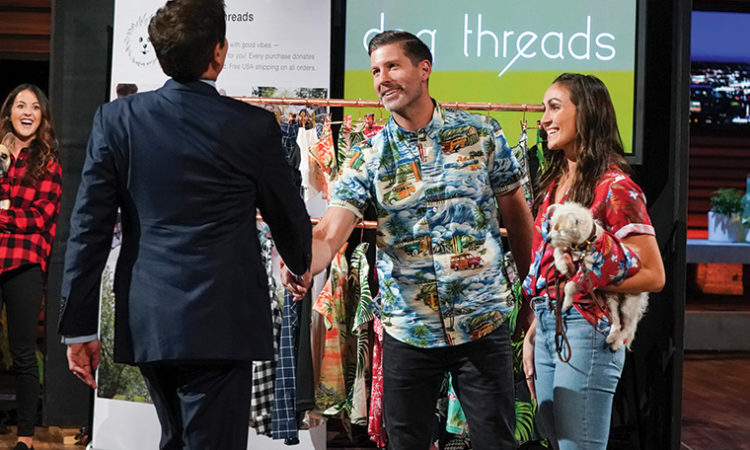 Dog Threads founders Scott and Gina Davis shake hands with Mark Cuban on Shark Tank after he offers them a $250,000 investment.

In November, Long Lake company Dog Threads, which makes matching shirts for canines and their owners, went on the popular ABC show Shark Tank and walked away with $250,000 in investor capital from angel investor Mark Cuban—the same man who, in 2015, famously said on the show that “kids and animals are the worst.”

Since he’s obviously unaffected by cuteness, the experienced lender and billionaire owner of the Dallas Mavericks must have seen something else compelling about a little-known Minnesota brand that makes button-up shirts for dogs.

He’s not the only one financing such ventures. In 2018, Kisaco Research, a UK-based company that hosts B2B conferences and exhibitions worldwide across various industries, launched an annual summit for the pet industry called Pets & Money. The exclusive one-day conference held in Austin, Texas, in December works to connect businesses in the pet industry with investors.

“From momentous transactions such as General Mills’ acquisition of Blue Buffalo and J.M. Smucker’s acquisition of Ainsworth Pet Nutrition, to a flurry of minority investments, it is clear that strategic buyers, venture capital, and private equity alike continue to have a strong and growing appetite for the pet industry,” Kisaco Research states on the summit website.

Increased spending on pets is driving investor interest. In 2006, Americans spent $38.5 billion on their pets. By 2018, they’d nearly doubled that number, to a whopping $72.6 billion. But what’s driving the increased spending and overall industry growth?

Growing trends in lifestyle and education, says Ali Jarvis, who has built a business on knowing what people want for their dogs. Following a career in accounting and business development at Target Corp. and MSP Communications, plus a stint as a Pilates instructor, Jarvis launched Sidewalk Dog Media in 2008. The company aims to “help people spend more time with their dogs … and help dogs spend more time with their people.” It keeps tabs on dog-friendly places, events, businesses, and activities, as well as other pup-related news in the Twin Cities and beyond.

The biggest cultural shift that points to the increase in dog spending: Millennials are waiting longer to have kids. According to the Centers for Disease Control and Prevention, the average age of first-time mothers in 1972 was 21; for fathers, it was 27. As of 2018, those ages rose to 26 and 31, respectively. In the interim, Jarvis says, many are getting dogs. The American Veterinary Medical Association found that these millennials are the primary pet-owning demographic in the United States—the “dog mom” and “dog dad” generation, if you will.

Jarvis says many of these millennials are “caring for their pets just like they were their own kiddos.” As a result, she says, they’re spending more money and going to greater lengths to take special care of their animals. By default, dogs are becoming their stand-in kids.

Dog hotels like Minneapolis-based City Paws Pet Club have opened for when humans need an overnight sitter, offering “luxury suites” for dogs, boasting “chandeliers in every room, an over-the-top comfortable bed with luxury bedding, and a flat screen with the DogTV channel (cable television made specifically for dogs) in each room.” Starting at $64 per night, it’s not even the priciest option in the Twin Cities metro.

Doggy day cares, which offer care for your pet while you’re at work and can cost several hundred dollars per week, are also increasingly common, with hundreds of options available in Minnesota alone.

Then there’s the apparel. Dog Threads co-founder Gina Davis was in search of quality clothing for her dog in 2014. “Everything we found was kind of cheap and tacky,” Davis says. “We wanted more human-like apparel.”

When she couldn’t find the quality clothing she felt that Thomas, her Pomeranian-poodle mix, deserved, she made it herself and found that other people wanted it too. “Every time our dog wore the clothing out in public, people would stop us and ask where they could get them,” Davis says. She and her husband decided to start it as a small side business, “and it’s just organically grown really quickly”—so much so they felt it was time to step up their game. Cue the brand’s appearance on Shark Tank.

Pet tech is likewise thriving, Sidewalk Dog’s Jarvis says. According to CB Insights, between 2012 and 2016, $486 million was invested globally in pet cameras, Fitbit-type monitors, and more. Burnsville-based PetChatz is on the cutting edge with its “full multi-sensory interaction” device, which enables treat dispensing, aromatherapy, motion and sound detection, games, DogTV, and more. Your dog can even initiate a video chat. 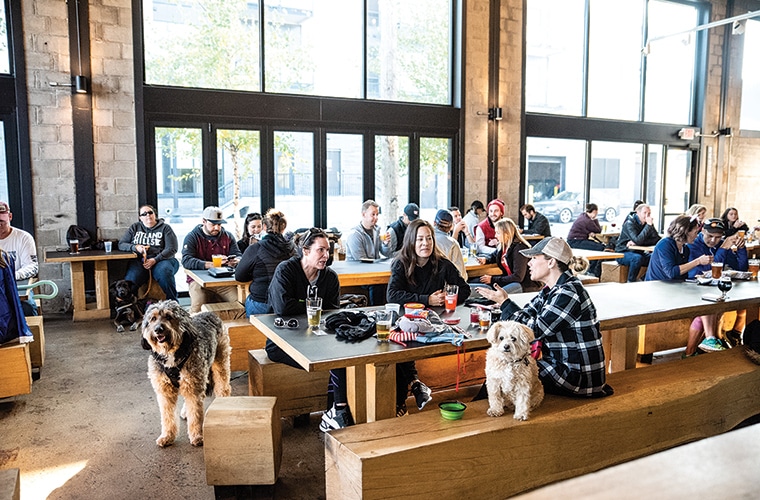 With that rise in knowledge has come a rapid expansion of dog food options for consumers and new revenue channels for pet food producers, says Jarvis. Today, there are the organic dog food options, of course. Then there’s raw food (meant to mimic what dogs would eat “in the wild”), vegetarian options, and foods without common dog allergens like grain. People can buy dog food that is dry, canned, dehydrated, or frozen, and they can even get fresh, customized meals delivered straight to their door.

“This trend is only going to continue,” Jarvis says. “You’re going to see big corporations like Purina and Mars snap up some of these newer, healthier, more premium brands, old-school brands that are needing to modernize and make sure they’re not missing this new generation of dog owners that aren’t just willing to feed their dogs puppy chow.”

“Businesses are more interested in not only being more dog friendly, but also really actively trying to acquire dog owners,” Jarvis says.

The restaurant sector is jumping on board too, Jarvis says. “They know that people are going to drive a little further or wait a little longer if they know that their dog is going to be welcomed on that patio. Not just tolerated or allowed,” she emphasizes, “but welcomed.”

Twin Cities area dog-friendly hospitality group Craft and Crew knows this as well as anyone and thrives on it. In October, the group opened its newest dog-friendly restaurant, The Block, in St. Louis Park. All four of its restaurants (they also have two dog-friendly bars) offer dog and human menus and amenities.

But what happens to the pet industry’s growing pool of non-necessities in the event of an economic downturn? Are brands like Dog Threads and PetChatz and restaurants like The Block likely to perish?

Cuban surely knew this when he quickly offered his investor dollars to Dog Threads—despite his disdain for dogs.

Jarvis understands this, too. Her own business, Sidewalk Dog, has expanded, launching in Chicago last year and Denver and Seattle this year, and she hopes to be in about 10 to 15 cities within the next five years.

“You know, buying stuff for your dog tends to be less expensive than buying a bunch of stuff for yourself,” Jarvis says. “Plus, it makes you just as happy—if not more happy. And like with kids, people really don’t want to sacrifice buying for their dog. … It’s like, “Oh, I can’t afford this $100 shirt that I really want, but I can afford to buy my dog this $40 Vikings jersey.”