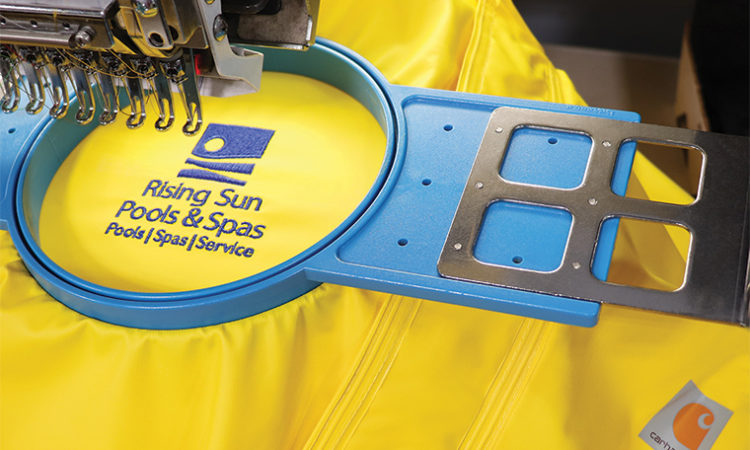 The Old Testament says you can’t put new wine into old bottles “else the bottles break, and the wine runneth out.” Entrepreneurs, using new technologies and contemporary mores, are bottling new wine for longstanding old concepts.

In 1987, when Ward started, the industry was dominated by salespeople driving around with big catalogs and samples in racks. While the promotional products industry is notoriously known for cheap “trinkets and trash,” he made his mark as a middleman selling high-brand products from Nike, Columbia, and Brooks Brothers to the logo sector.

At River’s End Trading Co., he experimented with selling a private-label golf brand, Page & Tuttle, online direct to consumers. The light bulb went off to sell corporate co-branded apparel and gifts online. He created a business, Merchology, and reached out to his son, Andrew Ward, and daughter, Ally Delgado, who had successful careers of their own, to be directors. Both agreed to help but didn’t want to be “the owner’s kids” in the company.

Andrew Ward is a 2006 business management graduate from St. John’s University. He started as a broker at a commercial real estate brokerage owned by industry veteran Jordan Greenberg. He and Greenberg offered their office building in Golden Valley to get Merchology started.

Delgado joined Deloitte Consulting in strategy practice after a Carlson undergrad program. She gained exposure in consumer packaged goods with clients like Walmart, Sam’s Club, Kimberly-Clark, Mars, and Kraft. After earning a Harvard MBA, she joined General Mills, working on brands such as Hamburger Helper, Nature Valley, and Fiber One.

Both ended up joining their father because “co-creating something that we all believed in and felt ownership in was different and exciting,” explains Delgado. She started working nights and weekends; within a year she was full time. For Andrew Ward it was an easy transition.

Merchology went live in 2014 with the kids among several co-founders. Dick Ward sold his shares in River’s End to avoid a conflict of interest.

Andrew Ward, as chief revenue officer, oversees brand partnerships, customer service, and sales. He has improved processes and built relationships with brand vendors and top customers. It began with Under Armour in 2015, a breakthrough that led to over 250 brands today, such as Patagonia, lululemon, Carhartt, Moleskine, S’well, and YETI.

Delgado, as chief marketing officer, oversees e-commerce, merchandising, and brand relationships. Her network was crucial for growth. Her marketing and strategy background was invaluable for a company offering more than 100,000 products shipped to 70 countries.

Both of them brought the perspective of millennials and technology expertise to complement their father’s long history of know-how in the field. Their strategy of offering recognized consumer brands, co-branded with the company logo, is captured in their tagline “Your Logo + Brands You Love.”

Originally, the capital-intensive “logo decoration process” was contracted out to small mom-and-pop shops. To meet the increased volume, Merchology acquired the assets and employee base of a local logo embroidery shop in 2016. In 2019, Merchology opened a second facility in Reno, Nevada, to be closer to the West Coast customers and reduce lead times and shipping expenses.

In over five years, Merchology has grown to nearly $50 million in sales, was recognized twice in the Inc. 500/5,000 list of fastest-growing privately held companies, and was ranked the fastest-growing company in the Twin Cities by the Minneapolis-St. Paul Business Journal.

Not satisfied simply with growth, the family has turned its focus to the hidden scourge of retailing. Fashion is one of the most polluting industries, with enormous social and environmental costs. So Merchology launched Zusa, a brand with multiple styles and colors of high-fashion clothing, all made primarily from recycled plastic bottles. The clothing line has the same technical performance as standard outerwear, while creating 75 percent lower CO2 emissions than virgin polyester does. The goal is to upcycle polyester by diverting some plastic from the 8 million metric tons that enter the oceans.

Even the packaging and boxes are renewable and recyclable. Zusa’s fabric mills are in environmentally conscious facilities without child or involuntary labor and comply with local environmental rules and regulations. Furthermore, the company donates 1 percent of Zusa- and Patagonia-branded product revenues to 1% for the Planet, a corporate and grassroots initiative to dedicate at least a percent of sales to environmental causes. The millennial yearning for sustainability is supplemented by the gratification of delivery in as fast as four days.

Merchology has not only remade Dick Ward’s brainchild, but in doing so is determined to refashion the fashion industry itself. This next generation exhibits the same deep passion that inspires winemakers to create new wine for old bottles.