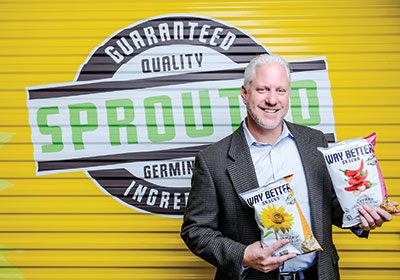 Way Better Snacks at a glance

Employees: 31 (16 Minneapolis, 15 Ontario); according to CEO Jim Breen, the company plans to add as many as 10 full-time employees in the first half of 2015.

To clarify: Those aren’t flavors of Way Better Snacks’ chips. Way Better chips do contain sprouted grains, seeds and beans, including flax, quinoa, kale and mustard seeds, as well as daikon radish and broccoli seeds. But each flavor of chip typically has just a couple of those. Actual flavors include sweet potato, blue corn, sweet chili and multi-grain.

The Next General Mills?

All right, that’s perhaps an overstatement. But Way Better founder and CEO Jim Breen does see the Golden Valley-based consumer food products giant as a model. “We do all the same things that General Mills does from a product development standpoint, sales execution, communicating and educating, [using] social media, community events,” Breen says. “Just with so many fewer people than they have.”

Editor’s Note: January’s edition of Twin Cities Business profiles 10 Small Business Success Stories. The newly relocated Way Better Snacks—which is setting out to devour the natural snacks category—is one of them. The others can be found at TCBMag.com.

Think snack chips, and you think potato or corn. Jim Breen, founder and CEO of Minneapolis-based Live Better Brands, wants snackers to think broccoli and daikon radish seeds, too. And he’s making headway. His company’s sole division, Way Better Snacks, makes and markets tortilla and pita chips that incorporate sprouted seeds, beans and whole grains into their recipes. In 2013, Breen moved headquarters from Long Island, N.Y., to the Twin Cities—where, he says, experienced food-industry professionals are more abundant. (A native Minnesotan, Breen also was eager to return home.) Once here, the company doubled its headcount, from eight to 16. Employee growth parallels Way Better’s sales, which rose from $7 million in 2012 to $14 million in 2013. It projects 2014 revenue between $20 million to $24 million.

Breen makes it clear that he’s just getting started: “We have a lot of runway still in front of us.”

Way Better Snacks sells nine flavors of corn tortilla chips and three offerings of pita chips. What makes them distinctive, according to Breen, is the process the company uses to germinate the seeds the chips contain. This process, he says, offers health benefits including increased digestibility and nutrient absorption. “It’s not some concoction from a laboratory,” Breen says. “We’re just removing these barriers in all grains and beans that block the uptake of nutrients.”

Once he formulated the product, Breen left his job as senior vice president of sales for New York-based natural foods company Hain Celestial Group to start Live Better Brands. He saw a healthy opportunity for his species of salty snack: According to Chicago-based consumer research firm IRI, U.S. natural snack sales increased 14.2 percent from April 2013 to March 2014. And a report released in early 2014 by Maryland-based Packaged Facts noted that about 14 million of the 50 million Americans identified as consumers of salty snacks are purchasers of “healthy” or “natural” versions of such snacks.

Way Better Snacks is reaching that market. Its chips now are sold in all 50 states—on the shelves in small stores, major grocers (including Cub Foods) and big boxes, including Target and Walmart. In 2014, with business expanding rapidly, the company acquired Ontario-based BioEssential Botanicals, which serves as its ingredient supplier and product manufacturer. Besides offering distinctive products in an expanding category, Way Better Snacks has flourished by partnering with other food manufacturers to market its chips.

One of those partners is Stillwater-based Curt’s Salsa, which featured Way Better’s blue corn chips at a Twin Cities food exhibition last spring. “It was a huge success,” Curt’s president Scott Hennis recalls. “They are on quite the growth path. It was a great win for our community to have them relocate their brand here.”

With his manufacturing in place, Breen is focusing on enhancing market share. “Natural foods as a category is growing so rapidly, and there are few brands that have an opportunity to be a $100 million brand in relatively short order,” he says. “We think we can.”