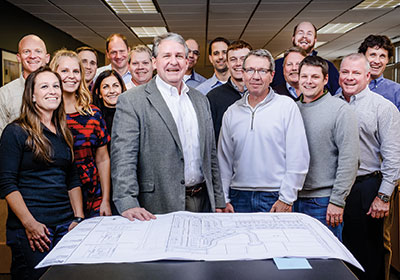 Oppidan at a glance

According to CEO Joe Ryan, “oppidan” is a Celtic word meaning “a builder of towns and creator of value.” He says that’s stretching the definition a bit, “but we’re going to go with it.”

Looking into the conference room at Minnetonka-based property developer Oppidan Investment Co., you can see about a dozen people talking quickly and intensely around a table. Though you can’t make out what they’re saying, you hear laughter that breaks up the discussion from time to time.

It sounds like a group that’s working hard and having a good time doing it—an impression CEO and president Joe Ryan confirms after the meeting lets out. “This is truly a team game,” he says. “It’s not just about me. We’re all doing this. And it’s really fun.”

For Ryan and his team, the fun comes from projects for clients in a variety of industries—retail is a particular strength. In most cases, Oppidan works with the client to buy land and hire a construction firm, then finds a long-term investor to buy the property. “At the end of the day, this game is pretty simple,” Ryan says. “It’s math—that’s all it is.” Oppidan works out the costs and the appropriate returns on the investment. Then, Ryan says, “we do what we say we’re going to do.”

Jim Hornecker, senior real estate manager for Eden Prairie-based Supervalu, can speak to that. “They are very tenacious and creative in getting things done.” In 2007 and 2008, for instance, Oppidan worked hard to bring down the costs for a shopping center on a St. Paul brownfield. “They were able to structure a deal so that it made sense for the city and made sense for us,” Hornecker says. The cost structure made it feasible for Supervalu to open a thriving Cub Foods store in the new center.

Though Oppidan can point to numerous projects like these, the game hasn’t always been fun. The Great Recession “absolutely crushed us,” Ryan says. He recalls a January day in 2010, staring out of his office window and wondering whether he should close up shop. Oppidan had money in projects on the boards, and the projects had screeched to a halt. Payments were owed to builders and designers; no one knew what tomorrow would bring.

Then Ryan thought of his team, both colleagues and clients. “I came to the conclusion that we had no choice,” he says. “We’re going to keep the pedal down, we don’t quit, it’s going to change.”

It did. On April 16, 2010, the phone rang—his friend Jay Bastian at Orlando-based National Retail Properties was on the line. “And he said, ‘Joe, we’re back in business,’ ” Ryan recalls. “I hung up the phone and I thought, ‘Woo-hoo! We’re out of the woods, boys!’ ”

Sensing an opportunity in oil country, Oppidan opened an office in North Dakota in 2012. The company has invested in 230 acres of land, 233 apartment units, and more than 1 million square feet of development.

And so a company that might have shut down after its 19th year is now building its 24th. Ryan started Oppidan in 1991 after working for another development company and coming to the conclusion that “I make a better employer than employee.”

Not surprisingly, he emphasizes his team’s diverse strengths. “We all have different ways of thinking, different ways of working,” he says. But there’s “one common thread: We’re straightforward.” Ryan himself is modest about his own role as company quarterback. But one thing he will acknowledge: The game is fun again.