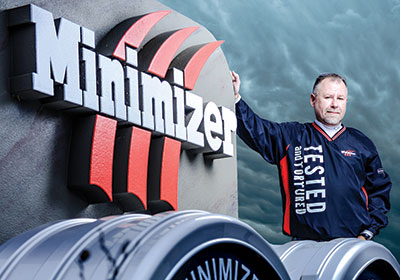 Minimizer at a glance

How do you get an industry that’s been using the same type of product for decades to try something new—something very new? That’s been one of the big challenges that Blooming Prairie-based Minimizer has faced in getting heavy-duty truck operators to use its polyethylene fenders.

“So much of the market is untapped,” Minimizer owner and CEO Craig Kruckeberg says. “We’ve had to educate drivers to put fenders on, period.”

Still, Kruckeberg has been able to spread the word. Minimizer posted nearly $21.5 million in revenue in 2014, a 26 percent increase over 2013. And Kruckeberg has plans to shift into higher gear in the future.

The vehicle for these ambitions is the company that Kruckeberg’s father founded three decades ago. Dick Kruckeberg was a truck driver who was constantly disappointed by his aluminum and diamond-plate fenders’ durability. A few weeks after a new set of fenders were hit and bent out of shape by a forklift, he came home to find that his wife had accidentally backed into the family’s plastic trash receptacle. He was able to pop the can back into its proper configuration. That made him think: What if you could make truck fenders out of the same high-molecular-weight polyethylene? In 1984, to do just that, he founded the business which became Minimizer, which gets its name from minimizing weight, spray and expense. Craig Kruckeberg would join his father’s company, purchasing it from him in 2006.

One of the reasons Minimizer, which had grown steadily under Dick Kruckeberg, has been accelerating under his son’s leadership, is Craig Kruckeberg’s focus on marketing: Minimizer spends nearly $3 million a year getting the word out about its products. The company’s fenders are among the most expensive available, so it has to sell drivers on value: Minimizer says its fenders don’t rust, show scuffs, fade or suffer stress cracking from road vibration.

“In some ways, Minimizer is a marketing company that makes things,” says Tim Kraus, president and chief operating officer of the Heavy Duty Manufacturers Association, a transportation trade group. “Craig isn’t bashful about promotion, and that drives the image that he’s running a company five times the size it actually is.”

Crucial to building that image is the company’s relationship with its distributors. Minimizer fields calls from customers looking to buy and directs them to a distributor. To pre-sell the product for distributors, Minimizer makes one demand on them: Sell only one plastic fender brand—Minimizer.

Minimizer markets other products to the heavy-duty trucking industry, including floor mats, toolboxes, mud flaps and bracket systems. This makes the company a kind of one-stop shop for its customers’ plastic accessory needs. But fenders remain its bread and butter.

Kruckeberg describes Minimizer’s current growth trajectory as “slow and steady,” though his idea of slow might be considered the fast lane by many other companies. In any case, Kruckeberg is revved up for the road ahead. “Our five-year plan is to hit $100 million in sales,” he says. “That’s not a goal. It’s a plan.”