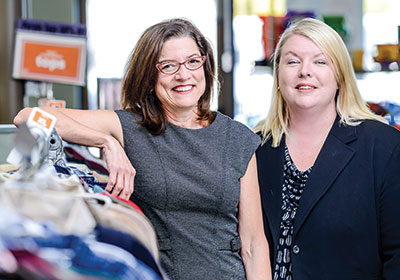 Arc’s Value Village at a glance

Employees: 233 full- and part-time workers, many of whom have intellectual and developmental disabilities

Growth fact: Raised $25 million since 1982 to support the Arc Greater Twin Cities’ programs for people with developmental and intellectual disabilities

In 2013, Arc’s Value Village had 1 million store visits from customers who browse, buy or donate.

What’s your idea of a thrift store? Does it include personal shoppers, rewards programs and sales events designed to make shopping there fun?

The Arc’s Value Village Thrift Stores & Donation Centers, which comprise five Twin Cities-area stores, has blurred the line between second-hand and traditional shopping, expanding its presence while supporting its mission to help people with physical and intellectual disabilities.

“We’re very committed to presenting a high-quality business and turning the notion of what a thrift store is on its head,” says Laurel Hansen, director of Arc’s thrift businesses. “We’ve put a store out there where people can get excited about shopping, where it’s clean and fun and never the same place twice.”

Hansen calls it “shopping with a purpose”—and it breaks down into goals of profit, people, and planet. Last year, Arc’s four stores (it opened a fifth in November) generated $8.5 million in revenue, with $1.6 million supporting the programs of the Arc Greater Twin Cities, one of 12 Arc chapters in the state. Arc provides a wide range of services for people with intellectual and developmental disabilities—helping them and their families with access to education, health care, housing, work readiness and abuse prevention. In the “planet” part of its mission, Arc’s stores encourage recycling by helping customers and donors find new uses for clothes, household items and furniture.

The Arc’s Value Village has succeeded by aligning its operations with retail industry trends. In 2011, its stores kicked off a personal shopper program. The free service pairs customers with “stylists” who help them find items that suit their tastes and needs. When a customer works with a stylist, Hansen says, the result typically is bigger sales—an average of $80 per trip, versus the usual $15. In addition, Arc’s stores have a “Haute Spot” section that highlights designer brands.

To help promote its stores, its services and mission, Arc’s Value Village worked with Minneapolis marketing communications agency Fast Horse to develop its “Be a Villager” campaign. The campaign’s goal: expand its mutually beneficial community of shoppers, donators, volunteers and Arc clients.

Barb Davis, a realtor and a board member of the Arc Greater Twin Cities, highlights Arc’s Rewards program, which gives customers points that they can use to shop after they donate, volunteer or make purchases. Started in 2012, the rewards program now has 24,000 members.

“They have a retail mindset, and at the same time there is a customer-service mindset and a mission-driven mindset,” Davis says. “Their whole tagline is shopping with a purpose, and that purpose is to generate as much as we can in sales in order to really focus on executing our mission.”