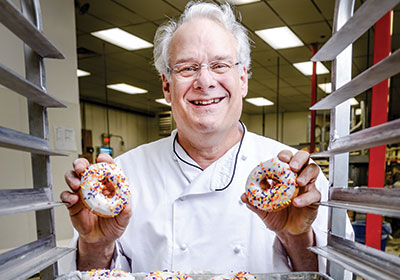 Grandma’s Bakery at a glance

The first cake that owner John Lupo ever made was for his girlfriend, Debbie. “I had just turned 26,” Lupo says. “I couldn’t buy a cake from another bakery. I had to bake it myself or I’d never live it down.” The couple married six months later.

In 2006, Grandma’s made the largest cake ever produced in Minnesota. It weighed more than two tons and was large enough to feed 94,000 people. Lupo produced it for the Minnesota State Lottery.

In 1978, at the age of 24, John Lupo III opened a Mr. Donut franchise on the corner of Prosperity and Maryland in the heart of St. Paul’s East Side. Eighteen months later, Lupo saw that his business was slipping. He needed to find a new direction—fast.

On the advice of his father, who was also the shop’s primary investor, Lupo called Mr. Donut’s corporate headquarters and asked to get out of his contract, which still had more than 18 years left.

“They gave me 24 hours to get the signs down,” he recalls. “I was going out of business, so I said let me go out my own way.” The next day, Lupo put up the Grandma’s Bakery sign and he widened his product line to include breads, sweet rolls, cookies and cakes. The product line had been limited with Mr. Donut, Lupo recalls, but “you needed more than doughnuts to survive.”

Still, doughnuts played an important role in Grandma’s early growth. In 1980, the now-defunct Maplewood Days Inn, which was experimenting with continental breakfasts, ordered a dozen doughnuts from Grandma’s Bakery. The hotel’s daily dozen soon became 10 dozen. By the mid-1980s, it was just one stop on Grandma’s three morning delivery routes serving hotels, convenience stores and other customers across the metro area. Since transforming his business, Lupo’s company has posted an average annual growth rate of 11.6 percent.

Lupo, who became a certified master baker in 1986, learned his trade from bakery technicians who sold their products to mom-and-pop shops. “I told them if you show me how to use your products, ” Lupo recalls, “I’ll buy them.”

In 1992, having outgrown his 2,000-square-foot facility, Lupo leased a 6,000-square-foot building in White Bear Lake. With more space to produce his wares, business quickly grew. By 1995, he was breaking ground on the first of three additions. Today his facility has tripled in size.

In 2008, Lupo opened an offsite retail store in downtown White Bear Lake. “I was having lunch with Mike Jurmu, one of the owners of Wuollet Bakery,” Lupo recalls. “And I asked him how his downtown White Bear store was doing. He said, ‘Fine. Do you want to buy it?’ ” Lupo did. In addition to his baked goods, Lupo’s White Bear shop sells soups, sandwiches and 92 flavors of vintage soda. “With a name like Grandma’s,” he says, “we need some of that old stuff.”

Lupo’s two retail outlets—the other is located at the firm’s production facility—account for about 25 percent of annual revenue. His wholesale and foodservice businesses cater to clients including 3M, General Mills, Target, Ecolab and the University of Minnesota.

Whitney Anderson, vice president of Minneapolis-based Instantwhip Foods, which buys about 40 frozen bakery products from Grandma’s Bakery, credits Lupo’s nimbleness for his success. “He has adapted to a changing market,” Anderson says. “He’s had to diversify into different product lines to grow his business. He’s very persistent.”