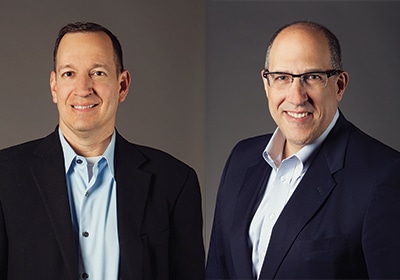 What It Does: Develops and manages IT management software suites for desktop and mobile Apple technologies.

“It was in some ways a great time to start a business, because we were in the bad economy, and yet we didn’t have the overhead or infrastructure costs of lots of our competitors,” Mallin says.

Digital marketing pros with two earlier ventures (and successful exits) under their belts, Litman and Mallin pumped more than $1 million into their new endeavor. Magnet 360 started as a network of a dozen small Twin Cities marketing agencies, each of which brought skills—design, brand management and so on—to collaborate on customized marketing projects.

The model worked well enough at first. But Litman and Mallin soon sensed a new opportunity. They witnessed a broader shift to one-on-one, more customized digital marketing, and saw that customer relationship management (CRM) was integral to that approach, because it allowed companies more access to data across multiple channels and the chance to tailor marketing messages.

Soon the founders observed how integral CRM platform Salesforce.com had become for clients, and that the cloud giant was evolving beyond traditional CRM. So Magnet 360 acquired two of its partners that specialized in the Salesforce.com platform; the other agency partners went their own way. In 2011, Magnet 360 re-emerged as a full-service marketing technology consultancy, offering marketing solutions that tie back to Salesforce. (In 2012, Salesforce became a strategic investor in Magnet 360.)

“We have the team that creates everything from the visuals of the customer experience to the business analysts that are configuring Salesforce’s tools to be able to deliver on the strategy,” Litman says.

Magnet 360 brings together consumer data collected in many other channels, including in-store point-of-sale systems, e-marketing data and online activity. This helps salespeople and marketing teams develop a complete picture of their customers. Magnet 360 also can deliver on implementation.

Litman and Mallin point to their single-shop approach as a competitive advantage. “You can talk to ad agencies with tons of experience on the engagement side, and you can talk to lots of IT shops with loads of experience with Salesforce,” Litman says. “And you can find lots of web shops that are agile and nimble.” Magnet 360 can do all three. “We get the solution out quicker for clients,” Mallin says. “And then we iterate and make it better over time, as opposed to [delivering] the huge project with the big bang at the end that may or may not meet the needs a year later.”

Litman and Mallin have been a dynamic duo since founding Minneapolis-based digital marketing firm Imaginet in the early 1990s. After selling Imaginet, they teamed with Edwin “Skip” Gage, founder of Minnetonka-based Gage Marketing Group, to buy back the company, growing its revenues before selling it again in 2001, this time to London-based WPP Group. Litman and Mallin became North American president and COO, respectively, and took the firm, renamed Connect@jwt, to north of $60 million in revenue before leaving in 2004.

“They’ve been a team as long as I’ve known them,” says Gage, who is Magnet 360’s principal investor and chairman. Gage calls Litman and Mallin “solidly successful” entrepreneurs.

Magnet 360 counts Fortune 500s, including 3M, Medtronic and General Mills, among its clients. Its recent acquisition of Los Angeles-based American Data Co. boosted its headcount to 110, and its retention rate has hovered above 95 percent since 2012. Inc. magazine named Magnet 360 one of the nation’s fastest-growing companies in 2013, with a growth rate of 1,231 percent in the three years leading up to 2012, when it reached $17 million in sales. It’s eyeing $28 million this year.

In 2005, the two launched the Minnesota Cup, the largest statewide contest for startups in the country. More than 8,000 entrepreneurs have participated; winners in the past few years alone have raised more than $70 million in capital.

Considering their track record, are Litman and Mallin itching for a new project, or an exit strategy? “We’ve built it so we can work here for years,” says Litman.