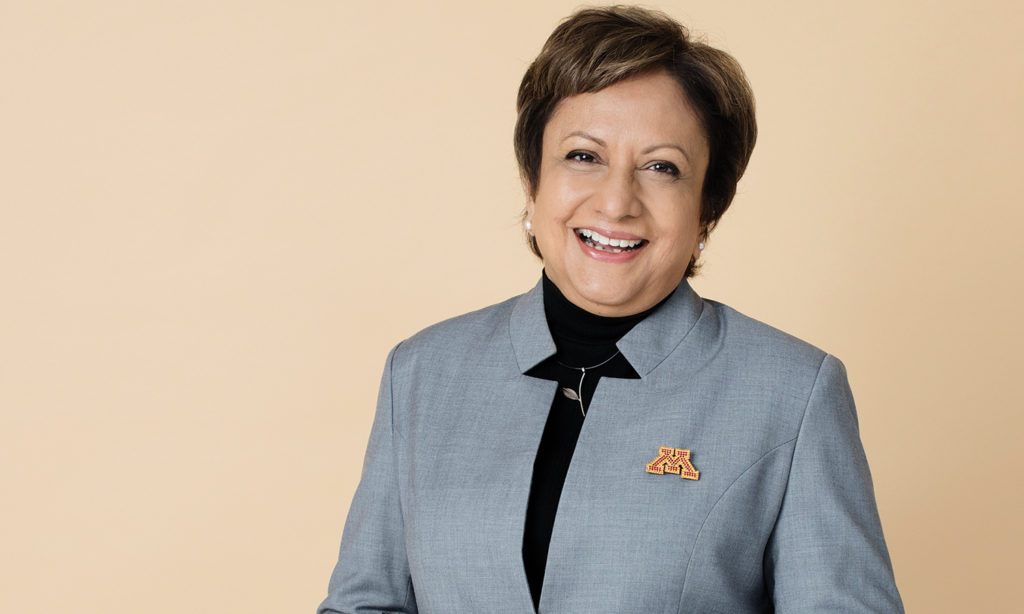 For Board Service to the Federal Reserve Bank of Minneapolis
By Liz Fedor
| October 18, 2020
Profile Video

When Sri Zaheer was preparing to become board chair of the Federal Reserve Bank of Minneapolis on Jan. 1, based on her prior Fed service she told people it was “a fairly normal board” and “nothing unusual” was likely to occur because of the economy’s stability.

Then the world was hit by a global pandemic that spread to Minnesota in March. Business shutdowns set the economy into a tailspin. And George Floyd was killed in late May in Minneapolis police custody, which ignited state and national protests.

“The board had to step up immediately and help the president,” Zaheer says, referring to Neel Kashkari, the high-profile president and CEO of the Minneapolis Fed.

Zaheer, dean of the Carlson School of Management at the University of Minnesota, conferred with Kashkari as 95 percent of Minneapolis Fed employees shifted to remote work. Weeks later, the pair discussed strategies to ensure the Fed building was secure during a period of social unrest.

The crises of 2020 have affected the substance of the Fed’s traditional work, which is setting monetary policy and addressing inflation and economic growth. “The most important thing that we do on the board is to track what is going on in the economy and feed that information to President Kashkari, and then give him guidance on what we would like to see happen with interest rates,” Zaheer says.

She is one of three members of the Minneapolis Fed who were appointed by the Fed’s Board of Governors, based in Washington, D.C. The other two are Harry Melander, president of the Minnesota Building and Construction Trades Council, and Securian Financial CEO Chris Hilger.

Explaining the nine-member board’s role, she says, “While the mission is one of public service, the board is composed of folks from the private sector. It is run very much like a private sector board.”

The full board meets eight times a year. At a minimum, Zaheer talks to Kashkari every two weeks to provide intelligence on what businesses are telling her about their financial conditions. During the summer, as Covid-19 restrictions eased, she contacted her vast network to learn more about the pace of consumers returning to the marketplace. She got early indications that the road to recovery would be slow for many companies.

Former General Mills CEO Ken Powell served with
Zaheer on the Minneapolis Fed board, and he preceded her as chair. “She has a very, very deep knowledge and connection with a network of industries,” Powell says. Zaheer is in a position to get candid appraisals, because she’s built relationships with businesses since becoming dean in 2012. “She is training the people who work at these companies, and she is connecting with all of the business leaders,” Powell says.

He emphasizes the importance of that “on-the-ground business knowledge,” because he says it’s central to Zaheer’s ability to regularly share her assessments with Kashkari. He says that Zaheer, as a regional Fed chair, also uses her business insights to brief Fed leaders twice a year at the national level—either a Board of Governors member or Federal Reserve chair Jay Powell.

During 2020, Zaheer also has been leading an extensive performance evaluation of Kashkari, which will be used to determine whether he should receive another five-year term. That assessment was still in process during her TCB interview, yet it’s clear that Zaheer and Kashkari have a strong partnership.

“I see in my role as chair of the Fed board to really work on public trust and public outreach,” Zaheer says. She views Kashkari as the lead actor carrying out that responsibility on a daily basis.

“Neel is one of the best communicators in the entire Fed system,” Zaheer says. “I see him as the Dr. Fauci for the economic issues of the pandemic.” Since March, both Kashkari and epidemiologist Anthony Fauci have been in the national media spotlight.

Kashkari has been outspoken on economic, pandemic, and racial justice issues. That level of engagement “absolutely” has the support of the Fed board, Zaheer says.

Kashkari characterizes Zaheer’s approach to her Fed position as one of stewardship. “It’s a critical leadership and oversight role to make sure that we are fulfilling our public service mission to the region and to the country,” he says.

“All of us have to change how we operate in the Covid world,” Kashkari says. “I just think the board needs to be nimble, and she is leading that very well.”

Six of the nine Minneapolis Fed board members are elected by member banks, including three who come from financial institutions. Ken Powell says the board stays away from polarized politics. “I never felt partisan currents in the board while I served,” he says. “It was a very constructive give-and-take.”

Zaheer says she supports candid conversations and a “variety of voices,” but that she hasn’t witnessed major divisions. “I can’t say that we have factions on this board,” she says.

However, when boards have conflicts, she offers members the following advice: “Get them to think about a shared goal. Then it becomes easier to talk about ‘How do we get there?’ ”