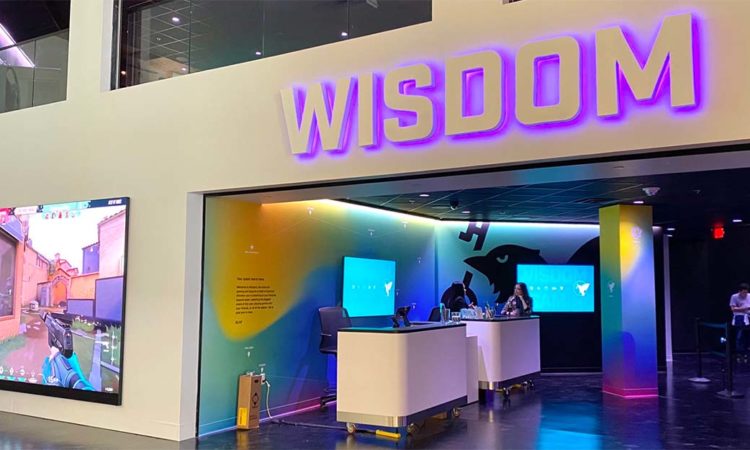 Wisdom Gaming is set to officially open its Mall of America esports venue in July. Photo courtesy of Wisdom Gaming

Steve LaCroix, former Vikings executive VP and chief marketing officer, steps into the role of president at Wisdom Gaming. His goal is to leverage his professional sports industry experience to elevate the esports company.
By Tina Nguyen
June 02, 2022

Bloomington-based esports company Wisdom Gaming on Thursday morning announced it has appointed Steve LaCroix as president. He previously served as executive VP and chief marketing officer for the Vikings. After spending 20 years with the Minnesota football team and then a decade before that with the Indiana Pacers/Pacers Sports & Entertainment, LaCroix was introduced to Wisdom Gaming through founder and CEO Mike Zweigbaum. They clicked right away, said LaCroix.

LaCroix is joining Wisdom Gaming at a critical time. The Company’s Mall of America in-person venue is prepping for its official opening in July. Nationally, the esports market continues to grow as dozens of other startups take root in the industry. In a conversation with TCB, LaCroix talks about his transition to esports and the future of the industry.

LaCroix: Coming from the NFL for 20 years, I knew enough about esports and gaming to respect the industry. But until you really get into it, you don’t realize just how broad and deep it is. It’s not just the competitive organizations, but the whole gaming culture and game publishers. There are so many aspects to the industry. I feel very strongly this is the future, especially for the younger generations.

TCB: What do you hope to do at the helm? Any Vikings partnerships on the horizon?

LaCroix: Wisdom has grown tremendously since the pandemic started, and that growth was all done through remote production and remote hiring, like most companies. Now, we’re back in an office space on a flex-basis here at Mall of America on the north-side tower. Minnesota Vikings have their own esports organization—Version1 and Rokkr. Hopefully, there are ways to partner together in the community to make an impact on the esports and gaming fans and customers.

TCB: Do you see traditional sports fans becoming esports fans, or is this about reaching a new audience?

LaCroix: I think it’s a little bit of both. There are a lot of traditional sports fans that are very passionate about esports and gaming, and then there are a lot of fans that traditional sports cannot reach. These are some of the exciting opportunities we have: We’re able to deliver to brands, fan bases, and customer bases that are very difficult to attract, because of cord-cutting, ad blocking, and different things like that.

TCB: Are you currently seeing a lot of cross-over from traditional sports to esports? Such as your former Vikings colleague Brett Diamond making the transition into Version1 Minnesota Rokkr.

LaCroix: I think that will continue to be a trend—though it’s hard to predict the level of that transition. But Brett was part of my sales and marketing team, and it’s been neat to see him make that transition into an industry that he was not intimately involved with. And hopefully, as the industry settles in and continues to evolve, there’ll be opportunities for others with my type of experience to come in and hopefully make an impact.

TCB: How does the esports revenue model compare to traditional sports?

LaCroix: There are multiple verticals from a revenue standpoint. There are the brand partnerships that we’re going to work very hard to build. And it’s not just local and regional, but national and international brands. Us having the venue at Mall of America provides a ton of revenue opportunities. The mall welcomes 40 million visitors a year. So there are revenue opportunities in the space itself, as well as across the mall footprint. And then there’s Wisdom’s white-label production capabilities. We create content, and host and produce events, like we did recently for Riot Games–our first major event here at the mall. There are multiple revenue opportunities, and we feel that Wisdom is very well positioned to offer up a variety of different ways that just drive the revenue part of our business.

TCB: Your Mall of America venue just recently began hosting events. How do you expect the location to be used?

LaCroix: The actual public grand opening will be a little bit later next month in July. We see it as our home base. There’s so much potential due to the traffic flow, and the brand and image of Mall of America being one of the top entertainment destinations in the country. We may partner with the Mall as we consider future events. Having two hotels attached, the airport right across the street, and light rail connecting, we think is a good formula for some cool events that have not and could not be done in other locations.

TCB: What do you predict about the future of esports? How does Wisdom Gaming tie into that locally?

LaCroix: It’s going to only continue to grow. We would love to become the esports hub for the upper Midwest and the Midwest. You see a lot of activity on the coasts and down in Texas. But here in the Midwest, we know there’s a ton of people who are passionate about gaming and are looking for a home base. It’s going to be exciting to see how we can tap into those built-in crowds and further build the Wisdom brand. We’re a young company that has grown a ton over the last couple of years. We think the future is bright for Wisdom. I’m very honored and excited to be part of it.

TCB: You’ve been in the professional sports industry for decades. Could you have predicted this transition to esports just a few years ago?

LaCroix: I did not see this coming. Ironically, my son works for Version1 Rokkr as a marketing coordinator. We’ve got two LaCroix family members here in the Twin Cities as part of the esports gaming industry with the two separate companies. I followed him as he grew over time as someone passionate about esports and video games. To see him launch his career, and then, ironically, to see his dad follow at a different company here in the Twin Cities is funny to some, I suppose.

But now, I am really bullish on the future of the industry and how Wisdom is going to fit into that landscape. We are going to try to create more Wisdom-owned and operated events. We’re excited about how we can create some annual and legacy events here in the Twin Cities that Wisdom brings to life. We want to become supportive of the community and local charities and not-for-profits. That’ll be something on the radar as the Wisdom brand continues to evolve.

(This interview has been edited for length and clarity.)