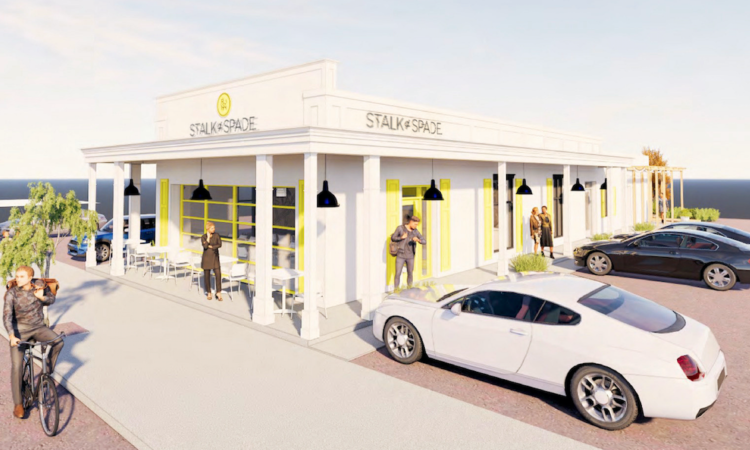 Rendering of Stalk & Spade, under construction in Wayzata.

Stalk & Spade is scheduled to open April 22—Earth Day—in the former Starbucks spot at 740 E. Lake St., across the street from Smiley’s Crisp & Green flagship. Like Crisp & Green, which recently announced national expansion plans, Smiley plans to franchise Stalk & Spade. And he’s confident his plant protein concept can be the market leader. “I believe in five years we’ll be in every market in the country.”

The Stalk & Spade menu will feature plant-based alternatives to hamburgers, cheeseburgers, chicken sandwiches, chicken nuggets, and shakes. Even the smoked gouda on the mushroom burger will be made with plant-based ingredients. The recipes are proprietary—Smiley’s team has been developing and testing for months.

“I’m utterly convinced we’ve cracked the code on plant-based burgers. You won’t know the difference,” Smiley said. “I knew the only way people would come is if the food tastes like classic favorites.” In a dozen blind tastings with consumers, Smiley said not a single person knew they were eating plant-based meat.

The plant protein market, which includes animal meat and dairy alternatives, is projected to grow from $4.6 billion in 2018 to $85 billion by 2030, according to investment firm UBS. Just last week, market leader Beyond Meat announced partnerships with McDonald’s and Yum! Brands, parent company to Taco Bell, Pizza Hut, KFC and other chains, to develop plant-based protein items.

But so far, innovation in plant protein has come primarily from retail brands and manufacturers like Beyond Meat and Puris, its Minneapolis-based pea protein supplier.

“I wanted culinary control,” said Smiley, who appears to be first to market with an all plant-based fast casual concept that isn’t focused on salads, grain bowls or other “healthy” options. The question: are consumers—particularly in the Midwest where food trends are slower to catch on—ready to get their burger-and-fries fix from a plant protein-based chain?

“I’d rather be ahead of the curve than behind it,” Smiley said. “And isn’t it great to have a national brand start here rather than on the coasts?”

Stalk & Spade is Smiley’s third concept to launch in Wayzata, which is where he got his start with Steele Fitness, the high-end studio training company he sold to Snap Fitness in 2014. Currently seven Crisp & Green locations are open in the Twin Cities and Dallas and another 21 under contract from Iowa to Florida.

A longtime vegan, Smiley credits his 11-year-old son Asher for the plant-based burger inspiration. When your dad runs Crisp & Green, you tend to eat a lot of salads for dinner. One night while standing in line at Crisp & Green, the boy turned to Smiley and asked, “Why can’t I just get a burger?”

“I started developing the concept that day,” Smiley said. “He forced me to think differently.”

Smiley incorporated Stalk & Spade as a separate company from Crisp & Green with no outside investors. But the new concept will benefit from the salad chain’s successful mobile phone app, which helped it seamlessly pivot to online orders during the pandemic and add specialty grocery delivery.

“We’re going to look like a national brand from day one: dine in, order ahead, car-side pickup,” Smiley said. “I believe all-plant eating is our future. It’s exciting to be first.”

Listen Now: Steele Smiley shares his entrepreneurial journey and startup lessons on By All Means podcast.