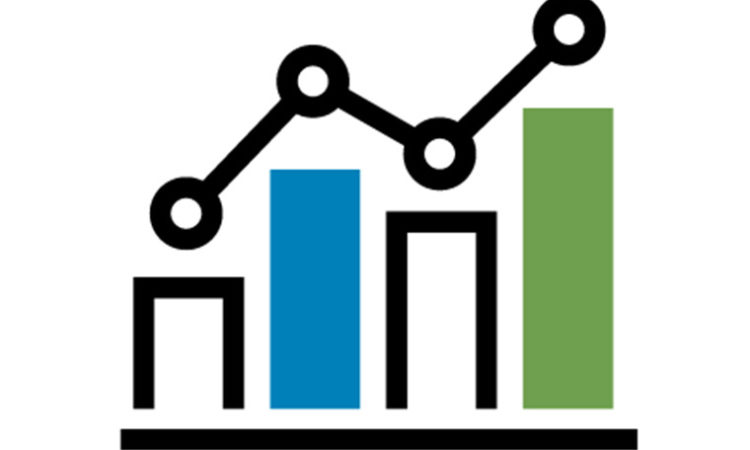 More than half of the business leaders responding to TCB’s Quarterly Economic Indicator (QEI) study in late December say they expect business conditions nationally and globally to improve during the first quarter of 2018. This is the highest level of optimism on this front in the 26 consecutive quarters that TCB has conducted these surveys.

About 10 percent of respondents expect conditions nationally and internationally to worsen—the lowest percentage yet recorded by the survey, and down nearly 50 percent from sentiment expressed when heading into the fourth-quarter of 2017.

Optimism about business conditions in Minnesota for the current quarter also increased, but not as much. Some 34 percent of respondents expect conditions in the state will improve, a level last seen heading into the second quarter of 2015. It’s also up from last quarter’s dismal 16 percent, and higher than the 25-quarter trailing average of 31 percent.

In Minnesota, however, finding qualified talent continues to tarnish an otherwise optimistic outlook, and to clearly stand out as the greatest challenge facing the state’s economy. TCB’s study found 59 percent of respondents expect finding qualified talent will become more difficult this quarter—the highest percentage recorded since this survey started in the summer of 2011. Less than 2 percent said they thought it would become easier.

Among other indicators, capital expenditures are expected to increase at 37.5 percent of the companies responding to the survey. This compares with a trailing average of 33.6 percent. R&D spending is expected to stay about the same.

TCB’s quarterly study also asks respondents to tell us what they expect to be their greatest business challenge in the fourth quarter. Finding good employees topped the list among the 218 written responses, with more than one-third of the answers expressing this concern. Among the other issues:

Given a chance to add their opinion to any other issue, 48 respondents chimed in. Here are a few of their responses:

Another question asked whether those businesses that plan to expand will do so in Minnesota. This quarter, 59 percent indicated they will, up from 53 percent last quarter and the same as one year ago at this time; 22 percent said they won’t; 19 percent answered “unknown.”

Since mid-2011, Twin Cities Business has sent more than 10,000 business leaders throughout the state the same set of questions every quarter, asking them about plans and expectations for the next three months. This issue’s survey, conducted at the end of December, provides insight into the first quarter of 2018, ending March 31.

32.1% (up from 28.4% last quarter). The governor’s approval rating rose from 27.8 percent a year ago at this time. The percentage of those who disapprove of the governor came in at 56.6 percent, about the same as last quarter and slightly less than 58.9 percent one year ago. 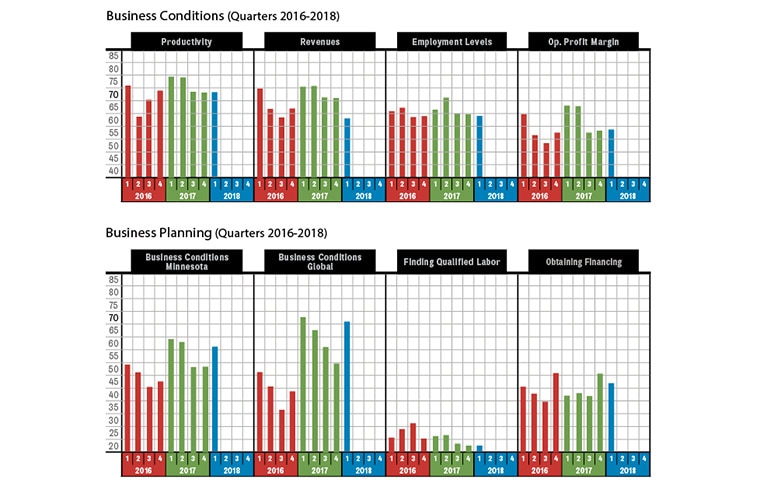 At right, percentage of respondents anticipating increases or improvements in these areas during the first quarter of 2018. Note: this is diffusion-indexed.For each question, all responses for “increase” added to one-half of responses for “maintain/stay the same.” Above 50 is positive; below is negative.

Survey responses are used to compile TCB’s Minnesota Economic Outlook Index, which comes in at 53.4 this quarter. This is up from last quarter’s 50, but about the same as one year ago (53.1). An index above 50 indicates healthy business growth; below signals slowing business growth. This indicator compares with a 25-quarter average of 52.6. 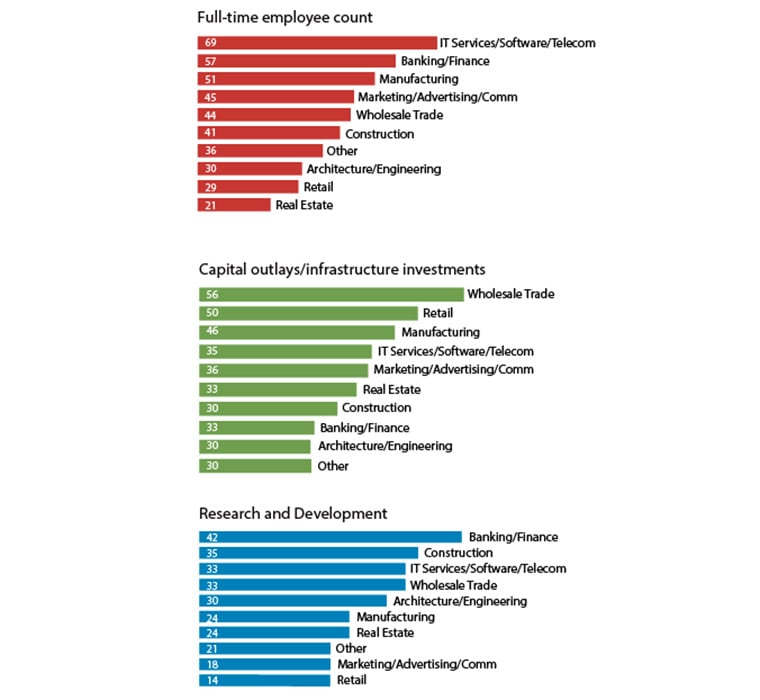 Percent of 274 Minnesota businesses, by industry, that anticipate increases in these areas during the first quarter of 2018. 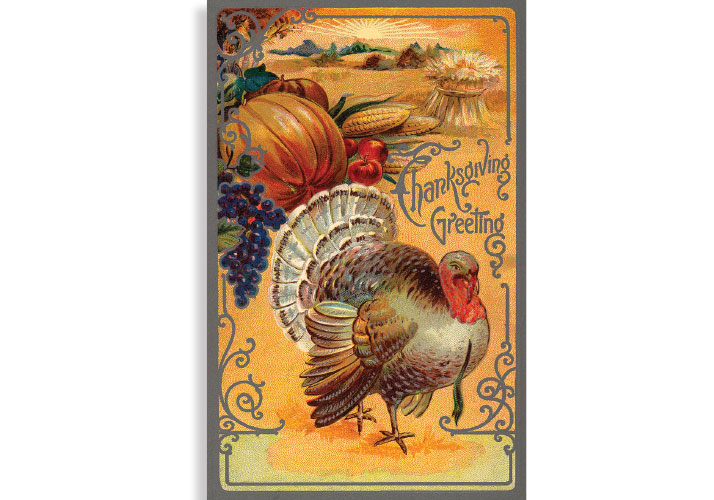 Percent of respondents, by county, that anticipate increases in these areas during the first quarter of 2018.

Twin Cities Business conducts its survey quarterly to provide a look at business planning and sentiment among leaders across all industries in Minnesota. An email link to an online survey was sent to 14,056 Minnesota business leaders in late September, and reminder emails were sent the following two weeks to those who had not yet completed the survey. The Minnesota Chamber of Commerce provided some of the email addresses used in this outreach. As of January 3, 274 leaders responded, resulting in a 2 percent net response rate.

55% of business leaders in Minnesota expect to increase wages during the first quarter, the highest level reported since TCB began tracking this indicator two years ago.