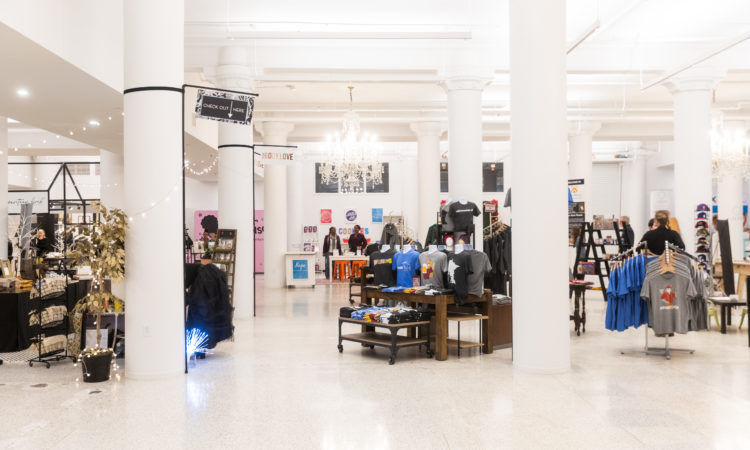 The market spans more than 40,000 square feet on the first floor of the Dayton’s building Caitlin Abrams

A maker’s market double the size of last year’s opens today in the historic department store building, but developers are working on permanent tenants.
By Allison Kaplan
November 17, 2022

The Dayton’s Project debuts its second annual Winter Maker’s Market today with twice as many independent vendors as last year and some bigger Minnesota brands, like Red Wing Shoes, Faribault Mill, and Sota Clothing. The windows of the historic Nicollet Mall building will once again be dressed up for the holidays, and to really amp up the department store nostalgia: Dayton’s Project is bringing back Santa Bear, a Christmas collectible from the glory days.

Last year, the holiday maker’s market was intended to create some buzz around the $350 million redevelopment of iconic Dayton’s building and bring people downtown to see it for the first time since Macy’s closed to shoppers in 2017. The market provided a high-profile sales floor for small, local brands, including many owned by women and minority entrepreneurs. But the bigger hope on the part of 601W, developers of the 1 million square foot project, was that a popup market occupying the gleaming first floor space would help potential permanent tenants see the possibilities.

Another year has passed, and still, there are no permanent retail tenants in the building. The long-promised food hall has yet to materialize. The former J.B. Hudson jewelry store space, designated to become a restaurant, stands empty. Throughout the entire 12-floor building, just about 77,000 square feet of office space has been leased to four tenants, leaving 773,000 square feet vacant.

“No one wanted to make any decisions in 2021,” said Cailin Rogers, spokesperson for the Dayton’s Project. “It’s moving faster now. I’m excited about some of the names in the pipeline.”

But the Dayton’s Project hasn’t announced a name since Prudential Financial leased 28,000 square feet in September. And Rogers isn’t naming any other names yet.

She did say in a recent interview with TCB that the Andrew Zimmern-curated food hall—one of the first buzz-worthy amenities announced way back in 2017 and stalled due to the pandemic—is tip toeing forward. Construction is about 80% complete, and despite rumors to the contrary, Rogers said developers are not planning to wait for more office tenants to be signed before opening the food hall. Still, they have yet to set a date and continue to carefully monitor downtown traffic patterns.

“If it opened today, we don’t think it would be successful,” Rogers said. “We can’t go faster than folks are coming downtown.”

Zimmern’s food hall team is in touch with food vendors—some of whom have gone out of business since the project was first announced; others that are on standby, waiting for a green light. Rogers said there’s a “qualitative aspect” to setting an open date for a Dayton’s Project food hall. “Is there excitement? Do we see people asking about it on social media? Are people feeling safe about downtown Minneapolis? We’re not quite there, but we feel a big civic responsibility to bring downtown back.”

There’s also the financial responsibility: according to loan terms, building owner 601W has until Nov. 1 of 2023 to lease 400,000 square feet of the Dayton’s Project. Rogers said she expects several new tenants to be announced in the coming months, and that could include skyway level retail.

“The bottom line,” said Rogers, “601W are creative dealmakers. We have very smart, very capable, dedicated people thinking about these things every day. We don’t have it solved, but we’re getting there.”