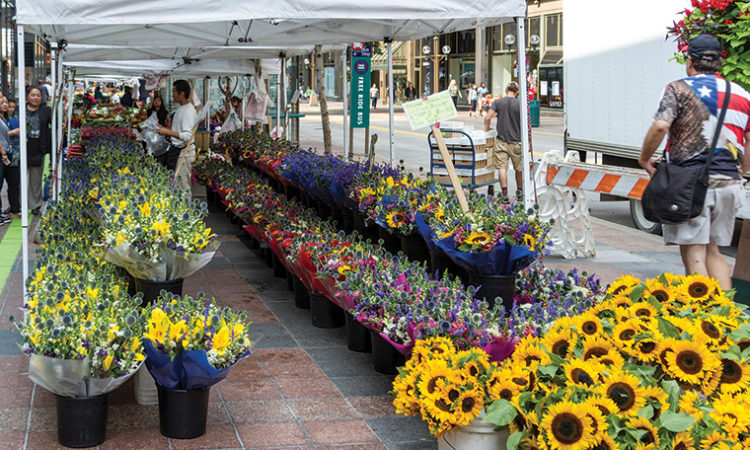 Add a Touch of Nicollet Mall to Your Backyard

Pavers from the old sidewalks are now on the market.
By Sam Schaust
February 01, 2018

Has the City of Minneapolis got a deal for you. Shortly after reconstruction on Nicollet Mall began, upward of 18,000 granite pavers from the old thoroughfare sidewalks hit the market. With work on the new Nicollet Mall now “substantially complete,” the city’s Department of Public Works is still sitting on a mountain of pavers that it would love to get rid of.

“Even if it takes 100 years to get rid of them, well, right now, that’s the plan,” says Mike Kennedy, director of Public Works’ transportation, maintenance and repair division. Until then, the pavers, largely unused backups bought in 1990 to replace damaged pavers, are being stowed in a secure facility in North Minneapolis waiting for interested buyers. Few have come forward. Larry Matsumoto, the city’s principal paving engineer, estimates no more than six individuals have contacted the department; all are private citizens looking to re-do their garden or build a backyard fire pit.

Matsumoto says the price is in line with competitors (starting at $4 per paver), namely home goods retailers. Before putting them up for sale, Matsumoto talked to a number of landscapers, he says, including Maple Grove-based Coldspring granite company—where the city bought the pavers in the first place.

The idea to sell the pavers follows a system the Public Works Department set up in the early 2000s. “Back in the day when we would open up streets for construction, we’d often have people come out and pull bricks right out of the street,” says Kennedy. (These pavers dated back a century or more.) “In a way, selling the bricks on our website was a [way] to keep [the public] off our construction sites.” Buyers snapped up these those classic paving bricks, such is their appeal. But with such slim interest in the newer pavers, few sales are forthcoming.

The money the city receives from selling its bricks and pavers generally covers the cost to move and store them, Matsumoto estimates. “We’re competing with Menards and Home Depot to sell these things,” adds Kennedy. “There just aren’t that many people who are really gung-ho to get Nicollet Mall pavers.”