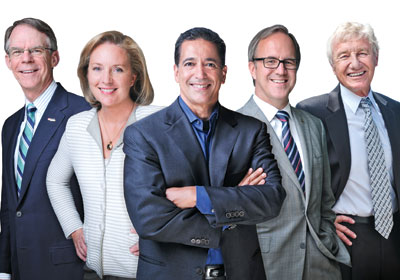 Each year, Twin Cities Business recognizes the accomplishments of Minnesota executives who have made lifetime contributions to Minnesota business. The 2012 inductees into the Minnesota Business Hall of Fame join an elite group of individuals who rank among the most accomplished and respected Minnesota business leaders of all time. Each has an entrepreneurial mindset and confidence that has driven their success. At the same time, each has a down-to-earth quality that is quintessentially Minnesotan.

Bahram Akradi founded Life Time Fitness with one location, in Brooklyn Park. Life Time is now the one of the largest fitness club chains in the country, with 105 locations and annual revenues of $1 billion. Much of Akradi’s success is due to the fact that he doesn’t sit still, either in his own exercise habits or in his ability to adjust to changes in the market.

Douglas Baker Jr., CEO of Ecolab since 2004 and its chairman since 2006, has guided the St. Paul sanitation supply and food service equipment company into new markets through dozens of savvy acquisitions. Ecolab now has operations in 160 countries and $11.3 billion in annual sales.

Richard Davis started in the banking industry as a teller. Now he’s chairman, CEO, and president of U.S. Bancorp, one of the nation’s largest regional banking systems, with 3,085 branches in 25 states. Among Davis’ other successes as the bank’s leader: keeping it away from risky investments that tripped up banks large and small during the recession.

Curtis Sampson made his hometown of Hector, Minnesota, the headquarters of a telecommunications empire that stretches worldwide—and which has reached into other holdings outside telecom, notably Canterbury Park, which he saved from closing.

Sally Smith was a financial officer for hearing-aid entrepreneur Ken Dahlberg when she took over one of Dahlberg’s investments, a small Cincinnati-based restaurant chain called Buffalo Wild Wings. It’s not small anymore: Under Smith’s leadership as CEO and president, Buffalo Wild Wings is a successful public company that’s within striking distance of 1,000 stores. 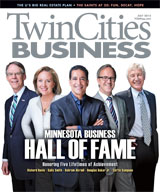