The Ecolab chairman and CEO has overcome numerous challenges during his climb to the top. Now he’s overseeing the absorption of an acquisition that should nearly double his company’s size.
April 01, 2020 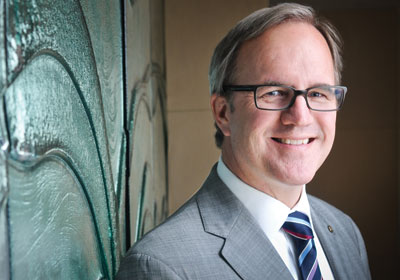 1981: Graduates from Holy Cross College with a degree in English.

1992: Goes to Europe to oversee a German joint venture.

2012: Oversees the acquisition of Nalco Holding, which will increase the size of Ecolab from $6 billion to $11 billion in annual sales.

Parents who fret over their offspring’s professional future can take heart in the story of Douglas Baker Jr. The chairman and CEO of St. Paul–based Ecolab Inc. graduated from Holy Cross College in Massachusetts—with an English degree. He then spent the following year in Aspen as a self-described ski bum. But after that, he took a job with Procter and Gamble—and while facing some major career challenges along the way, has experienced eminently notable success.

When Baker became CEO of Ecolab in 2004, the company’s net sales were $3.8 billion; headcount was about 20,000. In 2011, Ecolab’s pro forma net sales were $11.3 billion, and it now employs 40,000 people in more than 160 countries. Ecolab provides water, sanitation, pest control, and energy services and technologies to health care providers, restaurants and food service companies, industrial firms, and the hospitality industry, among other sectors.

The culmination, at least so far, of Baker’s career, is the 2011 merger with Illinois-based industrial water services company Nalco, a $8.3 billion deal that is expected to nearly double Ecolab’s sales once the merger is fully absorbed in 2013. The acquisition of Nalco opens the doors to new markets, including paper and oil exploration.

Baker’s rise at Ecolab was fast, but he didn’t follow the standard business fast track. Born in California, he moved with his family during his grad school years to Minnesota when his father, Douglas Baker Sr., took an executive position with Pillsbury. Doug Jr. earned a hockey scholarship to Holy Cross, ski-bummed in Aspen, Colorado, then started as a field advertising rep with Procter & Gamble, moved into sales and then into marketing and brand management when he told P&G that he was leaving for business school. (As it turned out, he never went.)

“My job was hiring people to hang samples on door knobs,” Baker recalls. “It paid $12,600 a year. I was as entry level as you can get. After a stint in sales, I was moved to brand management, which was the place to be at P&G if you wanted learn how everything worked.”

After seven years at P&G, Baker joined Ecolab in 1989 with the title of institutional channel marketing manager. Then a company with annual sales of $1.3 billion, Ecolab was benefiting from the explosive growth in the restaurant industry, particularly the big brands’ chain restaurants. Baker found himself in a sales culture dramatically different from buttoned-down P&G, and in the orbit of Ecolab Services Group President Al Schuman, a brash New Yorker and “a lot of fun,” Baker says.

Schuman and others saw enough in him that, when Baker was just 32, he was sent to Dusseldorf, Germany, to supervise a joint venture. Three years later, Ecolab sent him to Greensboro, North Carolina, on what turned out to be a crucible experience: managing Kay Chemical Company, a new acquisition with 65 percent of its business tied up in McDonald’s. Two months after Baker arrived, the fast-food giant announced that it planned to reduce its deal with Kay by half. Baker found himself in a daily pitched battle with his old employer, Procter & Gamble. It was a war he eventually won. Kay ended up regaining the McDonald’s business and built two other businesses at the same time.

“Without question it was the most stressful time of my life,” Baker says, one that he never would have gotten through without Julie, his wife. “She could not care less how successful I was in business,” he says. “Even today, I’m sure she has times when she wishes I wasn’t CEO. It takes up a lot of time. But she has always been a huge safety valve for me at home. Because of her I had the assurance that everything wasn’t at risk. Knowing that allows you to be a bit more courageous than you might otherwise be when everything in business is up for grabs.”

Baker also recalls the moment looking out at the employee parking lot during his battles at Kay Chemical. It was, he says, a moment that crystallized for him what being a company leader was all about. “I knew that if we lost McDonalds that I’d be fine,” Baker recalls. “I had skills. And most of the people on my team there would be OK. But looking out on those cars, I had to wonder how those people, our employees, would survive. You become a good manager when you start working for them. “That experience at Kay taught me a lot of valuable lessons about how you drive a business. How to surround yourself with good people, how to truly operate as a team, and how to do it for others and not yourself. We all have egos. But you have to learn that your ego must be secondary to achieving larger goals and recognizing opportunity.

“It’s interesting how with . . . trust, when a group of people know their backs are covered, good things will happen more often than not,” he adds. “And you learn, over time, that a criterion for defining ‘good people’ are those who define success as winning as a team.”

In 2001, Ecolab brought Baker back to St. Paul as the group vice president of its institutional sector business. From there the climb was fast: president in 2002, CEO in 2004 (succeeding Schuman), and chairman in 2006. Company growth has been just as fast, with Ecolab completing about 50 acquisitions since Baker became CEO. He has also been twice named in CEO magazine’s biggest value-creator awards.

“I’ve dealt with a lot of CEOs over the years and what strikes me about Doug is that he’s such an excellent blend of intelligence, wit, operational intelligence, and street smarts,” says Ecolab board member Barbara Beck, CEO of the Learning Care Group, a Michigan-based family of child care centers. “That combination of talents allows him to drive results and outperform the competition. Also, because he views business from the customer’s point of view, he is incredibly agile in adapting to change.” That agility may well be one of the benefits of Baker’s liberal arts education. That, and never losing sight of the big picture, even as his company has grown exponentially.

“If you’re striving for perfection, don’t be a CEO,” he says. “You do everything you can to analyze a business. But there’s a good chance I’m going to be wrong, more than once.

“I’m a big believer in momentum,” he adds. “Being a CEO is like steering a large ship. You’re going to have to adjust your course. The question is, do you want to do that from a dead stop or while you’re moving? If you make a mistake, identify it, admit it, and correct it. But keep moving. Standing still is a very dangerous thing to do in business.”