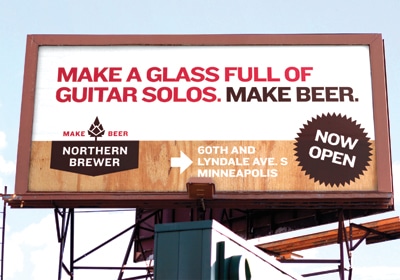 The rapidly fermenting beer culture here in the Twin Cities usually makes news when there’s testy testifying over a “Surly bill” or “Four Firkins bill” at the state Legislature. But to most people, it’s what beer has historically been about: Getting together to chill over a cold one.

Tap rooms are the public face of the movement, but home brewing is on the rise. So much, in fact, that Northern Brewer, a home-brewery retailer, recently opened a second location.

To get the word out, Northern Brewer turned to Minneapolis’ Modern Climate, a 40-person, independent agency that reported $5.5 million in billings last year. The home brewing ads were generally aimed at young-adult men, unlike the mooks targeted by most beer ads.

“People who choose to make their own beer are just a touch more oriented towards taste,” said Keith Wolf, chief creative officer at Modern Climate. Wolf was referring to flavor, but could have been taking about aesthetic judgment. Still, Wolf was clear that fun is a big creative component, as well.

The print ads evoke a do-it-yourself ethos of home brewing, with taglines like “Make a Pint-Sized Picasso. Make Beer.” The radio ads, with the tagline “Make Something Truly Amazing. Make Beer;” play a bit more on guy culture, but are still relatively sophisticated, at least compared to the Three Stooges vibe of Bud Light.

“We try to connect towards those on the smart side,” says Wolf. “It’s very conversational and you connect and have fun doing it. There’s a lot of irony in the conversations when you are standing around making beer with friends.”

Wolf deemed the budget modest, and said it included radio, print, outdoor, and online. But Modern Climate is used to finding solutions—“making something,” in Northern Beer parlance—with modest budgets, and in the process has a roster of big clients, including Best Buy, 3M, and United Health Group.