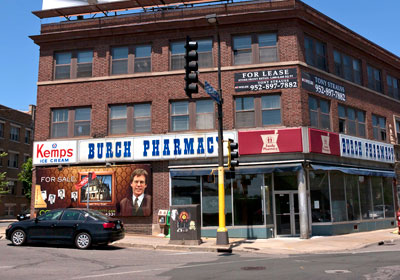 A long-vacant Hennepin and Franklin fixture gets a makeover.
July 01, 2012

It’s been two years since the century-old Burch Pharmacy left the Minneapolis intersection of Hennepin and Franklin, leaving one of the Twin Cities most prominent pieces of commercial real estate empty. The sale of the wedge-shaped building, languishing and increasingly decrepit—to Nolan Company of Wayzata—closed as this issue of TCB went to press. Nolan specializes in redevelopment of aging urban properties.

While independent pharmacies have gone the way of the dodo bird, chef-driven restaurants are a growth business, and Nolan project manager Ben Hertz says a linchpin of the purchase was a lease commitment he sought from the restaurant partnership that controls Bar La Grassa in Minneapolis’ North Loop. Partner Ryan Burnet and chef Isaac Becker plan to open an artisanally driven steakhouse, to be called Burch Steak, on the site in late fall or winter. It will take most of the ground floor of the building, leaving what was Burch’s annex for another retail tenant.

The restaurant, which will be one of the most anticipated openings of year, will have to secure parking for its guests in what is one of the more parking-challenged neighborhoods of the Twin Cities. The intersection, which a year ago boasted only Liquor Lyle’s, will soon be something of a restaurant row, home to yearling restaurants The Lowry, and independently owned Rye Deli, adjacent to the Burch building.