He emigrated from Iran just as the revolution was rising. Here in the United States, he’s risen in the fitness industry with his innovative, customer-focused Life Time Fitness club chain.
April 01, 2020 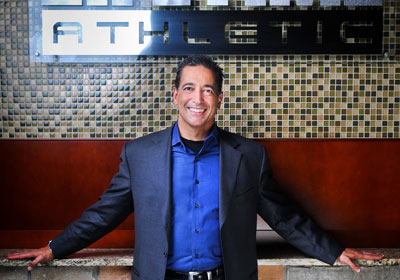 1999: Life Time opens its first location outside of Minnesota, in Michigan.

2012: Opening of 100th Life Time destination; company expands outside of the U.S. for the first time, in the Toronto area.

There’s a movie in the life story of a 17-year-old kid who leaves home, in Tehran, Iran, months ahead of the Iranian revolution, moves to Colorado, washes dishes at a restaurant to make ends meet, and within a decade is a millionaire executive vice president of a fitness club chain—and on his way to starting a $1 billion business.

Bahram Akradi, 51, the chairman, president, and CEO of Chanhassen-based Life Time Fitness, has perhaps the most remarkable biography of this year’s Minnesota Business Hall of Fame inductees. The son of an Iranian air force officer, who in the mid-1970s “knew something was coming,” Akradi followed his boyhood fascination with fitness and health to pioneer a revolutionary concept in “gyms”—no monthly contracts and truly full-service—that today has 105 locations in 22 states and one in Canada. And it’s still growing.

“Even as a kid I focused on what I had to do to get things done,” Akradi says in the wine room in his sprawling Eden Prairie club. “It was a way to avoid taking orders. I always had a problem with that.”

He describes his father, who worked in military finance and accounting, as “no nonsense. What he said goes. But he had good values. He was tough, but fair. He was without a doubt the most influential person in my life.” His father’s premonition of bad times ahead pushed Bahram to the United States in 1978 to live with an older brother and begin college. But instead of college he enrolled in his senior year of U.S. high school, to socialize himself with Americans his age. “Your senior year in high school is 180 degrees different from Iran,” Akradi says. “There you study, study, study all the time in order to get good enough grades to get into a university. Here your senior year is all about proms and homecoming. For me, it was one of the best decisions I made.”

After a few semesters of courses at Pikes Peak Community College and University of Colorado–Colorado Springs, Akradi picked up a graveyard shift with a Colorado Springs Nautilus Fitness club and quickly persuaded management to let him sell memberships. Within two years he was given the opportunity to co-manage a Nautilus club in Minnesota with the promise of solo managing the next one the company opened.

“By the end of my last semester, by selling memberships, I was already making more money than I ever would as an electrical engineer. Nautilus morphed into U. S. Swim and Fitness at the behest of Akradi, who scoured the Twin Cities for buildings suitable for transforming into new fitness clubs, negotiating the leases and using his drafting talents to design new, much larger clubs based on his own experience as a club user.

“People who build clubs only from the financial point of view sometimes fail—not always, but sometimes,” Akradi says. “They fail because they are not giving the customer what he is looking for. I tell people, ‘Watch your customer. See what they want. If you can react fast enough you can’t go wrong.’”

One key concept was treating customers as welcome guests. Out went annoying long-term contracts. In came an ever-expanding menu of services—day care, nutrition advice—aimed at aging but prosperous baby boomers and young families.

An executive vice president at 22, Akradi was made a one-eighth partner in U.S. Swim and Fitness. He continued to sift through demographic data—culled from radio and TV stations and university libraries—to determine the ideal locations for more clubs. When Bally’s bought out U.S. Swim and Fitness, a deal Akradi advised against, he struck out on his own to put his customer-centric ideas to work at the company that become Life Time.

It was a difficult and frustrating two and a half years trying to generate investor interest in a different, better fitness club experience. But Akradi made it work. What’s more, he’s earned recognition for his efforts. A Harvard Business Review article cited Akradi and Life Time as an example of overdue “business populism,” an ethos based on “customer satisfaction that begets loyalty, that begets profits.”

Joe Whitney, the son of legendary Minnesota business leader Wheelock Whitney, knew Akradi and encouraged him to make his pitch to his father.

“His English was pretty marginal when I met him,” Wheelock Whitney recalls. “I was very impressed at the way he had analyzed the situation. I really became kind of fascinated by the guy. He was likable, believable, and he was talking about an industry I love.” Whitney invested $75,000 in Akradi’s Life Time Fitness. More important, his buy-in assured other investors Akradi was for real. “I don’t mind telling you it has been a terrific investment for me,” Whitney says. “And I’ve put more in over the years.”

The first Life Time club was a refurbishment job of an existing club in Brooklyn Park. The location wasn’t quite the demographic Akradi had in mind. “But I had to start somewhere,” he says. “It had been two and a half years. I had to get something going to show we could do what we said. I had to build investor confidence.”

Much closer to the model that Akradi sought to pursue was a 65,000-square-foot club in Eagan, which opened in 1994. Though Akradi describes the project as “the home run,” the Eagan development had no end of complications. But its grand size and amenities gave investors a taste of his vision for Life Time. “I learned that you can never do a good enough job of painting a picture for investors,” he says. “You can always do better.”

Akradi found himself in another financing crunch in 2000, with six clubs in Chicago in the works at $25 million apiece. “I had to raise $100 million to finish those clubs, and at the time we were a $100 million company. It was a very, very tough time. But I got it done.” An initial public offering in 2004 (NYSE: LTM) brought in even more cash for further expansion.

Akradi’s ideas extend beyond simply opening more Life Time clubs. Responding to an American health care system he calls “the most broken you can have,” he sees significant opportunities for applying technology to truly individualized health screenings for members, engaging them with highly specific diet and training plans, possibly accredited by their insurers. Life Time also has created healthy-food cafÃ©s inside many of its locations; and it publishes a monthly healthy-living magazine, Experience Life. Akradi foresees a time in the very near future when these and other other new “healthy life” services will make up as much of a third of Life Time’s business.

“The opportunity to improve people’s lives and impact people’s lives is truly endless,” he says. As is his appetite for work: “I don’t believe in retirement whatsoever. ‘Retirement’ to me means ‘useless.’ I’ll be doing something as long as I can see ahead.”