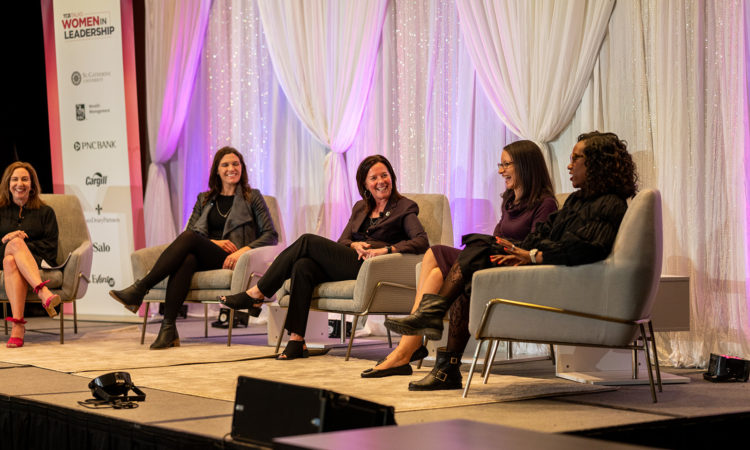 After two years of virtual events, TCB Talks: Women in Leadership returned to downtown Minneapolis on Tuesday, drawing more than 500 professionals for a lunchtime conversation about how companies work towards gender parity and what it’s like to lead a large organization in a pandemic.

With St. Catherine University as a longtime partner, the annual event provides the first look at the university’s Minnesota Census of Women in Corporate Leadership. The 2021 report shows that public companies in Minnesota are adding women of color to their boards in record numbers–up 54%, but women are not gaining presence in the C-Suite—in fact, at 22.6% the state lags behind the national average.

For women to get ahead, companies must rethink their ideas about who is qualified to lead. A longtime Best Buy executive who left in 2018 but was lured back to the C-Suite last year to lead Minnesota’s pro soccer team, Ballard used herself as an example, saying, “I don’t look like a CEO out of ‘central casting.’”

When she was named last year as the first female CEO of Minnesota United, Ballard said the most common question posed to her was: “Did you play soccer?”

People would then ask: “Is it a women’s team?”

Ballard wasn’t surprised by the reaction she received. “It’s born out of a history of what leadership has looked like,” she said. “But I think we have to get to a place where you disconnect leadership central casting and what it looks like to (instead) look at: What’s the job?”

Particularly in a hybrid work environment, Ballard said, the key to success is focusing on outcomes rather than how the work gets accomplished.

The job has changed considerably since the onset of Covid-19, Atchison said. A mother with two young kids, she experienced first hand the challenge of working from home, without childcare.

“I didn’t understand until I lived it, what it means to be without that,” said Atchison, featured on the TCB 100 for 2022. And while she personally prefers to work from the office and create separation between home life and work life, focusing on whichever is in front of her, she said the pandemic experience has made her more empathetic to the juggling some employees may have to do to get to the office. “I see the value of flexibility and the need for a bigger empathy bucket.”

As a Black CEO and the mother to a young son, living through a pandemic and the murder of George Floyd made it impossible for Sempowski Ward to separate personal from professional.

“To me, it was all about crisis management and how we find the best in a crisis,” she said.

“When the pandemic started two years ago, if you would have told me that you all would buy millions and millions of candles, I would have said you’re crazy,” said Sempowski Ward, CEO of Curio Brands, parent company to Curio candles and Thymes bath, body and home fragrance collection (read more about her work as a corporate board director). “I mean we were out scouring for toilet paper. I was thinking, candles? These are optional things in our lives. But we’ve found that consumers were looking for light in a really dark time.”

Morris, who moved to Minneapolis to join the Twins in the midst of this tumult, used sports to put it all in perspective.

“At the end of the day, it’s about perseverance. It’s about learning to fail and get back up again,” said Morris, also on the TCB 100. “If you’ve played anything, you’ve lost. What you do when losing is more important than what you do when winning. Sports tell an invaluable story and give an invaluable lesson about what we do in the face of defeat, and adversity that plays a significant role in what you do as an executive.”

Check back for a video of the full discussion. And read the cover story from our April/May issue for more leadership perspective on how women are approaching hybrid work.