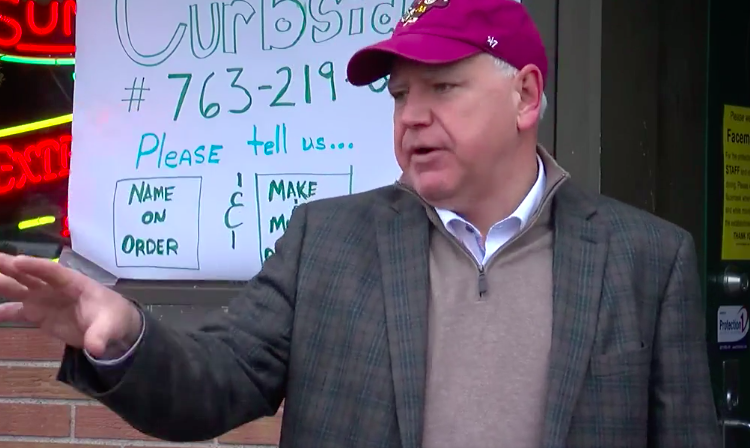 “The speed with which we move some of these things can really make a difference,” Walz told reporters outside The Nook restaurant in St. Paul.

The governor hopes to hold a special session once lawmakers reach an agreement on a new deal.
By Dan Niepow
November 24, 2020

A week after rolling out another round of Covid-19 restrictions, Gov. Tim Walz made the case for a state-level economic relief package for hospitality businesses.

Wearing a Goldy Gopher cap and speaking outside The Nook restaurant in St. Paul on Tuesday morning, the governor said there’s “bipartisan momentum” toward a financial relief package among Minnesota state legislators. The governor said he plans to call a special session once lawmakers have reached an agreement on a deal.

“Now that we’ve got a bipartisan group working we need to tone down the rhetoric around Covid and just get work done,” Walz told reporters outside the restaurant.

Earlier this week, Walz said that a state-level relief package would be designed to serve as “bridge” to a forthcoming federal stimulus package. Of course, U.S. Congress still appears deadlocked over another round of Covid-19 relief.

And on the state level, an economic package still hinges on bipartisan approval. On Tuesday, Walz emphasized that “good ideas will come from both sides of the aisle.” His hope is that lawmakers of both parties introduce a number of relief proposals and then reach a compromise. No GOP legislators spoke at Walz’s conference on Tuesday, though a few House Republicans held their own media briefing ahead of the governor’s.

As for the governor’s own preferences for a relief package? Walz said he’s hoping for a package that would provide direct relief to hospitality businesses, along with a temporary waiver of state licensing fees.

State rep. Ryan Winkler, DFL majority leader in the Minnesota House, said he was gunning for a proposal that could help as many as 14,000 businesses in the state.

“Hypothetically, if you had 14,000 businesses affected, you could scale a program for direct relief to each one of those businesses based on a dollar amount,” Winkler said.

Depending on the state’s budget forecast and size of individual grants, that could add up to a program valued at upwards of $350 million, he noted.

To hammer home the necessity of a relief package, Walz invited The Nook owners Mike Runyon and Janessa Casper to speak. “Us restauraters really, really need this,” Runyon said of an economic relief package. “We’re on the brink of collapse in this industry.”

Meanwhile, earlier on Tuesday morning, a group of Minnesota GOP House members held their own news conference and seemed to share the urgency for a relief package. State rep. Barb Haley said her caucus was calling for “immediate grant assistance,” which could provide as much as $400 million from state reserve funding.

Various industry groups have called for financial aid following the return of restrictions on restaurants and bars. Hospitality Minnesota last week sent a letter to Walz urging him to get a package moving. In a statement after Tuesday’s press conference, Hospitality MN President and CEO Liz Rammer said her group “readily accepts [Walz’s] offer to be at the table working to make sure relief gets to those businesses that need it the most.”

“We are heartened that legislators and the administration are both moving in the right direction to provide swift emergency relief, as we all need to work together to save this industry and its workers,” she said.