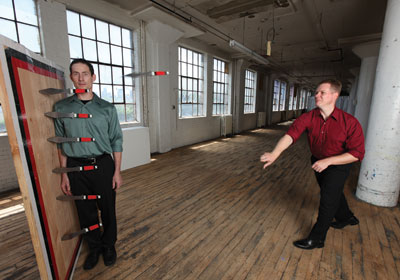 Take Your Clients To These Iconic Theaters

From Theatre in the Round to the Guthrie, there are plenty of options for treating clients to a show.
By Melinda Nelson
December 02, 2013

Theatre in the Round

If your client is an Anglophile, take them to Spider's Web at the Theatre in the Round, an intimate, arena–style theater built in 1969 in collaboration with Ralph Rapson & Associates, designers of the original Guthrie Theater. In this vintage whodunit by Dame Agatha Christie, a young diplomat’s wife discovers the body of a stranger in her drawing room, which she must dispose of before her husband comes home. After the play, settle your nerves at Republic with a pint of Hammerheart British Invasion English pale ale, brewed in Lino Lakes, and a platter of Fulton Blonde beer-battered fish and chips. Through Dec. 15, 245 Cedar Ave., Mpls., 612-333-2919 theatreintheround.com ; Republic at Seven Corners, 221 Cedar Ave. S., 612-338-6146, republicmn.com

Show your clients the off-Broadway side of Minneapolis with an evening in Lyn-Lake, the neighborhood that never sleeps. Take in a performance of the Pulitzer Prize-winning Driving Miss Daisy, directed by the Jungle’s legendary Artistic Director Bain Boehlke, who founded the theater in a storefront in 1991. After the show, stroll down the avenue to Moto-I, the first sake brewery outside of Japan, where you can savor eight varieties brewed on-site and an array of tasty and inventive Japanese street food. Through Dec. 22, 2951 Lyndale Ave. S., Mpls., 612-822-7063, jungletheater.com ; Moto-I, 2940 Lyndale Ave. S., Mpls., 612-821-6262, moto-i.com

For clients who believe that wit is the highest form of humor, Born Yesterday is a charming holiday treat. Written by Garson Kanin, author of Adam’s Rib and other Tracy/Hepburn films, this classic comedy mixes money, politics, and romance with amusing results. The Guthrie’s McGuire Proscenium Stage, which features a picture frame-style opening with a single vantage point, enhances the cinema-like experience. After the show, motor over to Murray’s and channel the spirit of Old Hollywood with cocktails, chateaubriand, and chocolate angel food cake. Through Jan. 5, 818 S. Second St., Mpls., 612-377-2224, guthrietheater.org ; Murray’s, 26 S. Sixth St., Mpls., 612-339-0909, murraysrestaurant.com

Clients with a fondness for history (and beer) will relish an evening at the Historic Hamm Building in St. Paul, home to the Hamm’s Brewery offices in the 1920s. Settle into your seats at Park Square Theatre to see Words By . . . Ira Gershwin. After the show, walk across the building to the Great Waters Brewing Co., where the beers are brewed with water from the natural spring beneath the building, and local specialties include London broil marinated in Brown Trout ale, duck in maple brown sauce, walleye, and wild rice burgers. Through Dec. 29, 20 W. Seventh Place, St. Paul, 651-291-7005, parksquaretheatre.org ; Great Waters Brewing Co., 426 St. Peter St., St. Paul, 651-224-2739, greatwatersbc.com

If your clients appreciate satire with a splash of sarcasm, take them to Brave New Workshop ETC. Just for the holidays, the Danger Committee, a comedy trio, performs A Stocking Full of Awesome III: You’ll Shoot Your Eye Out, an evening of comedy, knife throwing, and juggling. After the show, walk around the corner and descend into Hell’s Kitchen for a Three Amigos margarita made with roasted red pepper-infused tequila, a platter of St. Louis-style barbecue ribs, and live music. Through Jan. 4, 824 Hennepin Ave., Mpls., 612-332-6620, bravenewworkshop.com ; Hell’s Kitchen, 80 S. Ninth St., Mpls., 612-332-4700, hellskitcheninc.com