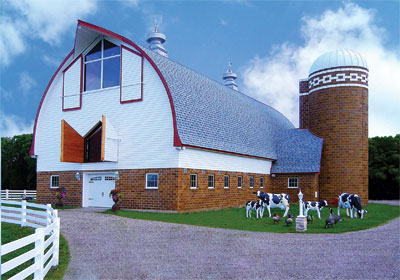 With a new name and a slew of renovations, a historic Eden Prairie barn looks to become the place to be.
January 12, 2013

When Steve Schussler purchased Eden Prairie’s Goodrich-Ramus barn in 2010, the creative force behind Rainforest CafÃ©, Galaxy Drive In, and Disney World’s T-Rex and Yak & Yeti restaurants planned to turn it into a storage facility.

The barn was slated to be replaced with a drainage pond, but it was the city’s oldest (built in 1942), which sparked community efforts to save it. After outbidding himself twice in a sealed-bid county auction, Schussler paid $82,000 for it.

Recalling a parade of cows he’d seen in Chicago, the playful Schussler posted 17 life-size fiberglass cows in front of the barn along Pioneer Trail, because, he says, “Wouldn’t it be cool to just make people laugh and smile every day on their way to work?”

The support Schussler received was overwhelming, he says, and prompted him to open the property to the people by making it an event center draped in his trademark romanticism and sentimentality. He built a white split-rail fence, turned the silo into a wine cellar, hung crystal chandeliers, and put in some 15 antique jukeboxes. “This whole barn is built around romance,” he says, and the jukeboxes from the 1930s and ’40s “represent that era of dancing and fancy-free living.”

Schussler has invested more than $1 million in the property to date, and projects annual revenues of more than $1 million. The 6,400-square-foot space has a capacity of 299, which has prompted calls from wedding and event planners. “We want to try to make money, but not gouge anybody,” he says.

Schussler hopes to open for business in the spring. For now, the cows are the main attraction. “Some people have to drink coffee in the morning,” says Schussler, “and some people have to get their dose of the cows.”