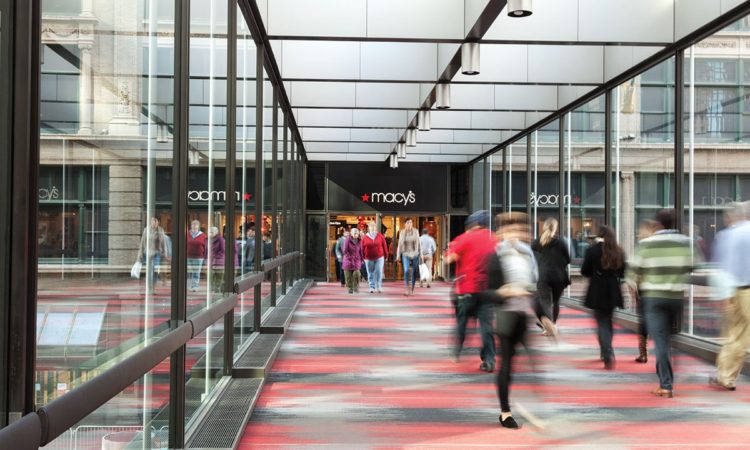 A skyway to 2016, when Macy’s still had a presence in downtown Minneapolis. Caitlin Abrams

The podcast 99% Invisible turns its design eye on the skyways of downtown Minneapolis and St. Paul to consider the history and consequences of moving people and commerce off the sidewalks.
By Allison Kaplan
January 31, 2021

Popular design-focused podcast 99% Invisible turned its attention above the streets of downtown Minneapolis and St. Paul this week for an episode that chronicles the history and consequences of the skyways. It’s a fascinating look at factors beyond relief from the cold that led to the creation of the largest contiguous skyway system in the world; weighty, difficult factors like the threat of suburbanization and fear of diversity.

Reporter Katie Thornton, a Fulbright Fellow and National Geographic Explorer who grew up in the Twin Cities, spent months researching the skyways and speaking to architects, historians, authorities like urban geographer Bill Lindeke, and yes, even me for some perspective on downtown’s rocky retail history, including the blow of losing the last remaining department store, Macy’s, and how that reignited the decades-old conversation about whether the skyways are to blame for downtown’s lack of energy. She came across some essays I’d written on the topic in 2016 and 2017—when losing a department store seemed like the big downtown problem. And while it seems like we’ve got much bigger issues today, as downtown on a Tuesday has become indistinguishable from downtown on a Sunday, this time away might actually be the ideal moment to reflect on the possibility of groundbreaking (skyway breaking?) change, as I suggested in my Oct./Nov. issue Editor’s Note.

I asked Thornton—who is too young to remember the glory days of Gaviidae Common, or a time when shopping Nicollet Mall was an all-day, dress-up event—what got her interested in the skyways. “Growing up in Minneapolis, I didn’t realize how unique they were. I never really had reason to use them. But I’ve long been fascinated by Southdale—the epitome of post-war suburbanization. It changed everything about how people shop and live—in the city, not just the suburbs.”

Thornton penned an essay titled “Streets, Skyways and Shopping Malls” in the Twin Cities Wildsam Field Guide, published in 2020. She paints a fairly dire picture of how the privately owned skyways—off-putting and confusing to everyone other than the business tenants they were designed to serve (remember the Skyway app?) —led to segregation and destroyed the street culture that is essential to an urban experience. She ends her essay by begging readers to go outside.

Those same themes come through in the 99% Invisible conversation, but with less certainty about the solution.

“My heart is always on the sidewalk,” Thornton says. But in her podcast reporting, she met James Garret Jr., a St. Paul architect who reminisced about his childhood in the 1980s, when skyways were his playground to explore and meet friends—before an increased security presence made them an uncomfortable place for young Black men like Garrett.

“His experience told me about a side of the skyways I never knew,” Thornton says. “Hearing his passion, longing to see the skyways be awesome again, really gave me pause.”

But her gut tells her, as it as many design experts and urban enthusiasts before her, that you can’t have it both ways, particularly without the population density of a Chicago or New York. “The divisions are just so entrenched.”

Listen to Beneath the Skyways on 99% Invisible.