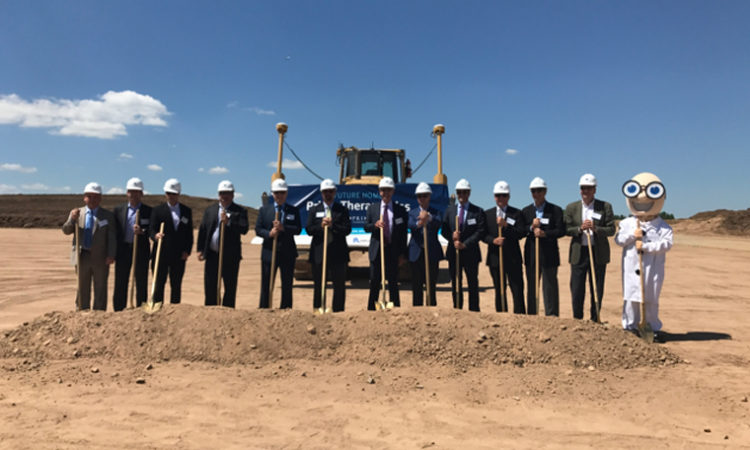 The building is set to replace the pharmacy benefit manager’s current headquarters, while allowing the company to consolidate its Minnesota operations from six offices to two. Prime’s 180,000-square foot office in Bloomington will remain open.

“The timing is perfect for us to be consolidating our operations and IT teams as it will generate efficiencies and financial savings for our company and our clients for years to come,” Prime CEO Jim DuCharme said at the groundbreaking ceremony. “We’re thrilled to be staying in Eagan, a city that is home to so many of our Minnesota-based employees, as it provides the skilled and vibrant workforce our company needs to thrive.”

More than 2,100 of Prime’s 3,600 employees are located in Minnesota. The rest are based out of the company’s regional offices in Orlando, Florida; Omaha, Nebraska; Albuquerque, New Mexico; Irving, Texas; and Pittsburgh, Pennsylvania.

As one of the largest pharmacy benefit managers in the U.S., Prime serves 17 Blue Cross and Blue Shield plans, working as a negotiator between drug producers or pharmacies and those who need the medications, such as insurers and self-insured companies. Its 2016 revenue was approximately $5 billion.

Minneapolis-based United Properties is leading the development of Prime’s new building, which will sit adjacent to the new Minnesota Vikings corporate headquarters. Most of Prime’s information technology and operations teams will work in space, which will is being constructed in two phases.

The first phase, slated for a late-2018 completion, will allow employees to move into the building and begin day-to-day work. Phase two encompasses additional construction finishes and will take until early 2020 to complete.

“This 400,000-square-foot office building is one of the largest office projects currently being built in the Twin Cities are and is shaping up nicely,” said Gordy Stofer, vice president of office development for United Properties, while at the groundbreaking event.

Among the amenity highlights of the new office, Prime said, is a fitness center overlooking Lake Shanahan and an outdoor patio and terrace that make use of the lake environment. An emphasis toward open working spaces instead of walled-off desks or offices were included in the layout plans, as was the inclusion of a large auditorium capable of holding more than 300 people.