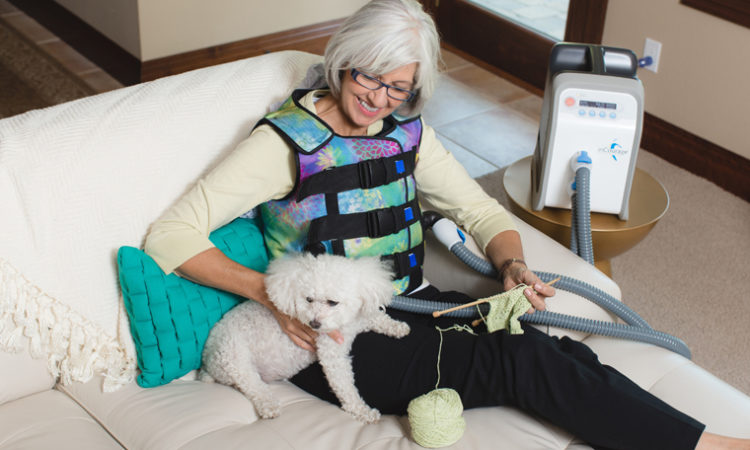 A woman using the inCourage System by RespirTech.

Terms and conditions of the purchase were not made public.
May 23, 2017

St. Paul-based Respiratory Technologies Inc., also known as RespirTech, has agreed to a purchase agreement with Royal Philips, the Dutch maker of handheld shavers, televisions and products in many other industries, including health care.

The companies did not disclose financial details of the transaction but said the deal was expected to close sometime in the coming months.

Per the arrangement, Philips will acquire all proprietary information and products owned by RespirTech. The local medtech company is best known for its inCourage System, a vest and machine unit that compresses the chest, similar to a blood pressure cuff, intended to loosen and move mucus through the lungs.

RespirTech’s flagship product was developed in the early 1990s as an airway clearance technology treating cystic fibrosis patients at the University of Minnesota. The company was officially founded in 2004 and has grown to serve thousands of patients with respiratory issues. Its portfolio also included single-use vests and bands that are popular in hospitals.

“With this transaction, we will broaden our portfolio with a proven therapy to enable patients with chronic respiratory disorders manage their condition and receive the care they need in the home,” John Frank, business leader for Philips’ Sleep and Respiratory Care division, said in a statement. “RespirTech’s vest therapy can be applied to a range of respiratory conditions and various neuromuscular diseases, where patients’ compromised abilities to cough often leads to serious respiratory complications and associated higher care costs.”

Philips said it would fold RespirTech into its sleep and respiratory care division, which consists of air purifiers, drug delivery systems and monitoring devices to treat COPD, asthma and other conditions.

Philips plans to take on most of RespirTech’s 220 employees outside of some administration cuts, said Dr. James Ehlen, CEO of RespirTech, to the Star Tribune. “Philips intends to build around RespirTech in Roseville a [respiratory] center of excellence,” he said.

RespirTech is expected to hit $50 million in sales this year. Philips had 2016 revenues of more than $27.4 billion.