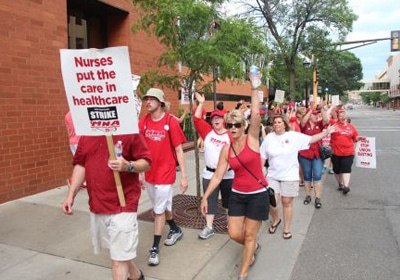 Allina Health and the Minnesota Nurses Union reached a tentative agreement Tuesday morning after a 17-hour negotiation session at the Governor’s residence.

The agreed upon three-year contract is expected to receive voter approval as the MNA said it would present the deal “with unanimous endorsement to members.”

Pickets are said to end today outside of five Allina hospitals: Abbott Northwestern and Phillips Eye Institute in Minneapolis, Unity in Fridley, United in St. Paul and Mercy in Coon Rapids.

Much of the talks between Allina representatives and the more than 4,000 striking nurses involved the hospital’s health care plans. Allina CEO Penny Wheeler said the hospital’s nurse-only insurance plans would phase out completely at the end of next year. To compensate for the increased costs nurses would face, Allina agreed to provide additional reimbursement and health savings account contributions in 2017, 2019, 2020 and 2021.

“Our goal all along has been to reach an agreement that is fair to our nurses and sustainable for our organization,” Wheeler said. “I’m proud to say that with this agreement, we have reached that goal.”

Moreover, throughout the 20-plus negotiating sessions, nurses had expressed concern over a need for protection against violent episodes taking place in the emergency department. Allina will start to provide 24/7 security officer staffing in the emergency department, Wheeler said, and also give nurses a more prominent role in its workplace violence and prevention committees.

Additionally, nurses will receive a 2 percent wage increase each year of the three-year contract.

“The nurses have shown remarkable strength and courage to earn improvements in workplace safety, nurse staffing policies, and multi-year contributions to accounts that will ease their transition from their contract health insurance plans to Allina core plans,” said MNA executive director Rose Roach in prepared remarks.

MNA members are expected to vote on the three-year contract this Thursday.