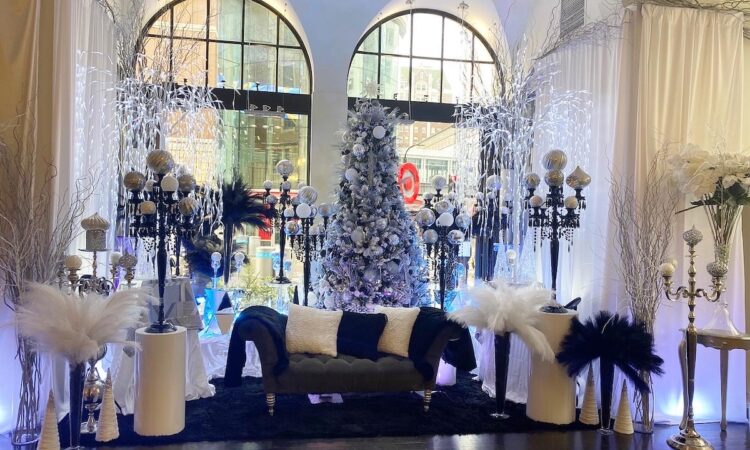 The historic Young-Quinlan building has reopened for holiday shopping.

The Holiday Village at Young-Quinlan will feature over 40 BIPOC and women-owned businesses through December 24.
By Winter Keefer
December 01, 2022

A new makers market featuring over 40 BIPOC and women-owned businesses is bringing new life to the historic Young-Quinlan Building in downtown Minneapolis this holiday season.

The Holiday Village at Young-Quinlan opened Thursday and will run from 11 a.m. to 6 p.m.  until Dec. 24. Open Wednesday through Saturday, the market is supported by the Chameleon Shoppes initiative of the Minneapolis Downtown Council, which partnered with The Black Market Events, Roho Collective, and Strive Bookstore to bring vendors to the market.

Shannon Fitzgerald is leading the Chameleon Consortium, a public-private group aimed at connecting and supporting BIPOC and women entrepreneurs while building the downtown economy.

“Our mission is about connecting entrepreneurs to spaces and each other, incubating the work that they’re doing, and accelerating their work to the larger community,” she said.

“It really is reminiscent of the space that it began as, so it has this historical feel to it with the columns, staircase, and everything,” she said.

The new market adds one more piece of community lighting up Nicollet Avenue this holiday season, joining markets like Departments at Dayton’s and shops in the IDS Center recently opened by Chameleon. A local Christmas market will be open from 10 a.m. to 4 p.m. Saturday and Sunday at the Four Seasons hotel, as well. (Visit mspmag.com for a comprehensive list of holiday shopping markets and events.)

“There are so many places to get really unique and original things that are artist driven and maker driven,” Fitzgerald said. “What’s exciting about it to me is that it’s what people are looking for right now. It’s not just the same old Amazon order.”

While Christmas shopping is top of mind for many, Fitzgerald added that many may be drawn out to Holidazzle in Loring Park as well. She said community collaboration is key to building out the “new downtown” as people emerge from the pandemic.

Mich Berthiaume with the Departments at Dayton’s said this year’s market has been “enormously” successful so far. The market launched with 68 brands, over double the number it had last year. When it comes to adding more markets to the downtown district, Berthiaume says the more the merrier.

“The more markets downtown all help each other and are just a huge advantage to the shoppers,” Berthiaume said.