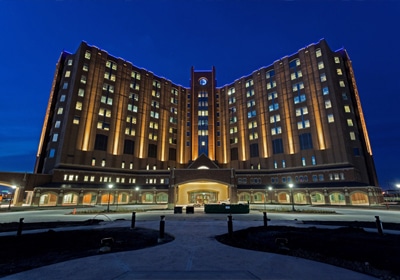 Minneapolis-based Mortenson Construction capped off one of the largest private industry construction projects in the history of the Dakotas on Tuesday as it handed off the keys to Sanford Medical Center in Fargo.

The $494 million, 11-story hospital took five years and 2.4 million man-hours from over 42,000 workers to build. Wayzata-based Nor-Son Inc. assisted Mortenson in the construction process of the facility, which was designed by Dallas-based HKS Inc.

“We are now just months away from this investment serving our region with the most advanced medical care,” Paul Richard, executive vice president of Sanford Fargo, said in a statement. “Now is our time to turn this building into a state-of-the-art hospital.”

In the months remaining until the Fargo hospital’s July 25 opening, Sioux Falls-based Sanford will be installing more than 25,000 pieces of medical equipment, supplies and furniture into the new one-million-square-foot facility.

Meanwhile, more than 1,100 training sessions will be taking place to prepare the Fargo hospital’s roughly 3,000-person staff. At the same time, the hospital will be actively hiring, attempting to bring in at least 240 more employees before the first patients arrive.

As one of the largest medical centers in the region, Sanford Fargo is anticipating upwards of 4,200 patients a day. The hospital is expected to provide services across nearly 200 specialties.

Sanford Health is one of the largest health systems in the world with nearly 300 clinics and 45 hospitals—including one in Bemidji—located across nine states and four countries. The company employs roughly 28,000 workers, making it the largest employer in the Dakotas.