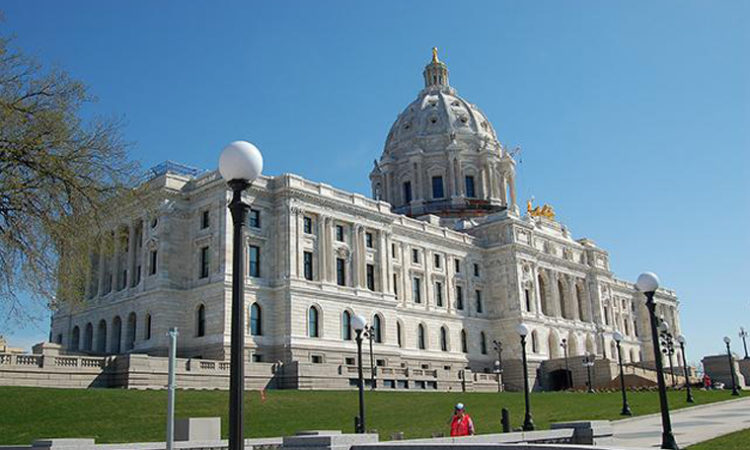 The forecast was released at an already complicated time. The relationship between Gov. Mark Dayton and GOP leaders remains rocky, and lawmakers are facing a short session at the start of a major election year.
By Briana Bierschbach
December 07, 2017

The blame game from politicians was familiar. And entirely expected.

Just one year after having a $1.6 billion surplus, budget officials broke the news Tuesday morning that Minnesota is facing a deficit. It’s the first possible shortfall in at least four years, and Democratic legislators were quick to blame the Republican-led House and Senate for pushing to spend that surplus last session on a major tax cut. A Republican leader said years of spending increases under Democrats was the real problem, even suggesting the number doesn’t reflect the state’s economic situation.

The reality lies somewhere in between, with increased state spending and decreased tax revenue contributing to the shortfall. Minnesota’s budget is also inextricably tied to how the national economy is doing, not to mention what Congress may or may not do on a host of issues.

Either way, both parties will face the same situation when they come back for the 2018 legislative session in February: For the first time since the nation crawled out of the Great Recession, Minnesota’s coffers aren't overflowing, and some are already tempering expectations about what they may be able to get accomplished.

The news comes at an already complicated time in state politics. Relationships are sour between DFL Gov. Mark Dayton and the Republican-controlled Legislature, the result of the governor vetoing the budget for House and Senate operations last May. And time will not be on their side, as lawmakers face a short session ahead of a major campaign, all of which could make any compromises hard to come by in 2018.

The deficit by the numbers

The state’s potential budget hole isn’t massive. The November forecast projects a $188 million deficit for the remainder of the  2018-2019 biennium, which is less than one half of one percent of the entire $46 billion state budget. The deficit could also be effectively wiped out if Congress decides to reauthorize funding for the Children’s Health Insurance Program (CHIP), which is currently under debate.

But after years of surpluses, even the prospect of a deficit is surprising to some. The country’s slow economic expansion has stretched on longer than any other period of prosperity since World War II. But the longer it went on, the more likely it was that the growth would come to a stop, said state economist Laura Kalambokidis.

Minnesota Management and Budget Commissioner Myron Frans said the deficit will grow even larger after an expected move from the Legislature to pass a bill to fund the House and Senate for the rest of the biennium. That will cost an estimated $114 million, increasing the deficit to $302 million. In the next two-year budgeting cycle, the projected deficit is expected to grow even more, to $586 million.

“It's not a 'sky is falling' kind of budget deficit, but it is concerning,” Frans said.

The reason for the number are “complex,” Dayton said, “and does not lend itself to a single, simple explanation.”

Since the last forecast overall state spending is up $400 million than expected, in large part due to increased spending in special education spending. Tax revenues are also down by about $559 million, including a dramatic $461 million drop in individual income tax collections. The state has $1.6 billion in rainy day funds and about $350 million in a cash-flow account, but Frans suggested that option shouldn’t be looked at quite yet as a way to plug the budget hole.

Uncertainty and caution at the federal level

That’s because the forecast is clouded with plenty of uncertainties, including how much longer the economic growth will continue to last. But the biggest questions are whether lawmakers in Washington, D.C. will pass the massive tax overhaul they are currently debating and how it could impact Minnesota’s budget.

The November forecast doesn’t include the assumption that Congress will pass the tax bill. There’s also plenty of other legislation that could have huge implications on the state budget, including the stalled health care debate and changes to federal immigration policy.

With so much uncertainty, Frans argued for cautious budgeting next year: “We do not know how long the expansion will continue, and it’s important we consider the risks as we make budget decisions in the next legislative session.”

Over the last several years, budget forecasts have been rosier, which has led to them usually being accompanied by wish lists of spending proposals from top leaders. Not this time. The uncertainties around the forecast kept leaders from saying much of anything at all. Instead, they’ll wait to make any budget plans until after the updated February economic forecast is released, which should happen shortly after lawmakers convene on Feb. 20.

“I intend to wait for next February’s budget forecast, before I finalize my budget recommendations,” Dayton said Tuesday. “Some of the questions surrounding this forecast will be answered during the next three months.”

In his remarks, Dayton was the only Democrat to not place the blame on Republicans for the current fiscal situation, arguing he also approached last session based on economic assumptions from the previous forecast. “This forecast is not saying that the U.S. economy and the Minnesota economy are not expanding, because they are; but rather they are not expanding quite as much as last February’s forecast assumed,” Dayton said. “Based on that forecast, the Legislature and I – and I’m not casting any blame on anyone here – we collectively cut state taxes and increased state spending, particularly in areas like transportation; early childhood, K-12, and higher education; the health insurance rebate; and reinsurance.”

Dayton’s response to the deficit was far more reserved than Democratic leaders in the Legislature, in part because they voted against the $650 million package of tax cuts and other proposals that Dayton ultimately signed. “I advised governor not to sign the tax bill because it wasn’t sustainable,” Senate DFL Minority Leader Tom Bakk said, adding that Dayton won’t be here for the next budgeting cycle to deal with a potentially larger deficit. “When you are managing from crisis to crisis to crisis….you can’t make good decisions for the future of the state. My view is a little bit longer.”

In her comments on the deficit, DFL House Minority Leader Melissa Hortman brought up the 2016 election, when Republicans expanded their majority in the House and took full control of the Senate. “We went from a $1.6 billion surplus to a $188 million deficit in a little less than a year,” she said. “Elections have consequences and hopefully people keep that in mind as we move into 2018.” The entire House is up for re-election next fall.

Senate Majority Leader Paul Gazelka had the most-repeated line of the day among Republicans: The forecast was “obsolete on arrival.” He said the economy was still performing better than expected and the calculations were made with too many factors missing, the biggest one being the federal tax bill. “I’m optimistic, everywhere around me I see good things happening,” he said. “I’m not worried about where we are at.”

In fact, Republican House Speaker Kurt Daudt said he expects there to be a surplus by the time the February forecast rolls around, and on more than one occasion, he floated the notion that MMB could have manipulated the numbers to show a deficit to make Republican tax cuts look problematic. “I don’t know if that was on purpose,” he said.

MMB puts the budget forecasts together by working with a nonpartisan state economist; they are based on state spending in current law, plus national trends in employment, income and production — information that is then plugged into Minnesota-specific models to predict tax revenue collections.

Daudt credited years of increased government spending from Democrats as the problem with the budget, saying the “chickens are coming home to roost.”

And Daudt and Gazelka said they were pleased Dayton didn’t come to the podium Tuesday blaming them for the budget situation.

As Dayton enters his final year in office, his tone was deliberate. He has a long list of things he wants to accomplish before leaving public life, and his relationship with lawmakers took a hit after he vetoed their funding. Though that move was upheld by the Supreme Court, Dayton has since offered to restore legislative funding as soon as lawmakers send  him a “clean bill,” meaning it doesn’t have any other unrelated provisions attached. He said the budget situation is “readily correctable, and I commit to doing so in the next legislative session.”

“I don’t carry things around,” Dayton said Tuesday. “If I carried things around I’d be 10 feet under just by the weight of everything.”