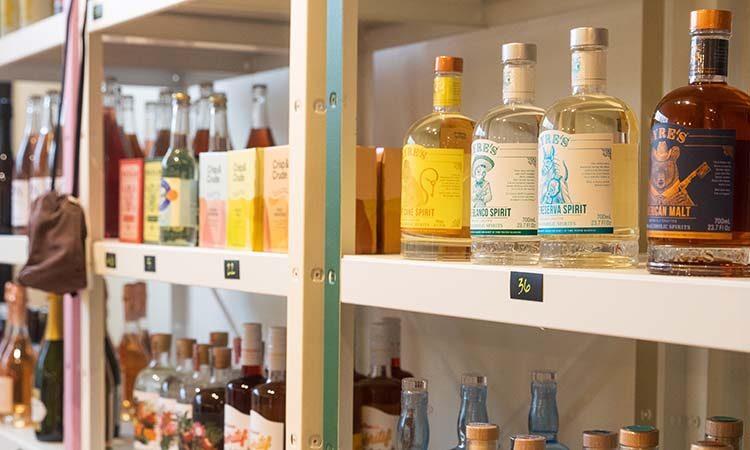 The boom in alcohol consumption during the early days of the pandemic has been the subject of numerous studies and news reports. But, more quietly, a different trend has been brewing over the past few years: More and more people are seeking out non-alcoholic drinks, and they’re asking for better, more robust options. A few Minnesota businesses are answering the call.

When you look at the statistics, people’s spending on both alcoholic and non-alcoholic beverages has been on the rise. A report by global marketing research firm NielsenIQ showed that in 2021, NA beverage sales in the U.S. increased by 33% to $331 million. Of course, that doesn’t mean people are abstaining from alcohol altogether, though. Year after year, Minnesota municipal liquor stores have reported record sales; in 2020, they reported total revenue of more than $410 million.

In Minnesota, breweries, cideries, wineries, and distilleries say they’re refining their offerings to meet the demand for both alcoholic and non-alcoholic drinks. In some cases, the two forms of libations go hand-in-hand. Equipment that removes ethanol from already-brewed beer and wine comes from ABV Technology, a St. Paul-based business. It’s used by one-third of Minnesota’s breweries.

Here are some local businesses working to expand NA options:

Ben Jordan, the founder of ABV Technology, is fascinated by beverages of all kinds – beer, wine, kombucha, coffee, spirits, all of it. He says he’s a “flavor and aroma junkie.” Not only does he want to experience different flavors and mouthfeel, but he also wants to understand the chemical makeup of a drink.

Around 2010, Jordan was publishing a lot of academic work and teaching. But at the same time, he said he remained “a social guy.”

“I liked to go out to parties. I liked to go out to wineries and breweries, and I ran into the distinct problem that everything was getting really high ABV,” or alcohol by volume, he said. “I would go out and have fun; then, at eight in the morning, I’d go and teach some high-level math classes. I was not exactly at my freshest.”

That’s why Jordan created technology that removes ethanol from already-brewed beer. Originally, it was for his own use, but he soon found others who were interested.

After assembling a group of investors, Jordan launched ABV Technology in 2019. He essentially scaled up his own personal machine and created a technology that any brewery could use to remove ethanol from large-batch brews. ABV Technology’s first customer was Matt Schwandt, owner of Bauhaus Brew Labs in Northeast Minneapolis.

The company now sells a de-alcoholizing machine called the Equalizer. Jordan said it costs about a quarter of the price of competitors’ products. Today, the machine serves a third of Minnesota’s breweries alongside several others across the nation, he said.

“We don’t only sell this machine to breweries that can afford it – the size of Fulton, Bauhaus, or Surly,” he said. “We also set up service centers here in town and in different parts of the country so that smaller craft breweries that make up the great majority of the craft breweries in the country can bring their beer to those service centers, process beer through those machines, and release a product in a demographic and in a market segment that previously didn’t have access to these options.”

But the business implications of the NA market extend beyond non-alcoholic products, Jordan added. What happens to the alcohol that’s removed from brewed beer?

Jordan is among the majority of NA drink seekers: He still drinks alcohol on occasion. “Like a lot of people in the last 10 years, we’ve made a shift, sort of reducing (alcohol) and making more responsible or healthier decisions.”

“People who are regular drinkers want to have healthier options. They want those same flavors and perceptions that fully alcoholic fermented beverages have – they just don’t want the ethanol part,” he said. “The experience for a lot of people isn’t about getting inebriated or having some euphoric feeling or whatever ethanol does for you.”

Erin Flavin, owner of Honeycomb Salon, opened NA retail space Marigold in November. Marigold’s products are not all non-intoxicating: The shop also sell THC drinks, a market that has boomed in the state after Minnesota changed its THC edible laws back in the summer.

Flavin was inspired to open the shop after the pandemic made her take a hard look at her own alcohol consumption. Early in the pandemic, she found herself drinking more. When she took note of the toll this took on her body and mind, the local business owner decided to swear off alcohol entirely. She says she’s never felt better.

“The alcohol industry has pushed so hard for it to be so normal to drink all the time,” she said. “One thing that happens when you stop drinking is everyone around you calls into question their consumption.”

There are several local groups making strides, Flavin added. Tres Leches, a lab in the Food Building in Northeast Minneapolis has been concocting non-alcoholic flavors and extracts for chefs and bartenders to use as a tool kit to make better drinks and dishes. Alcohol-free cocktail brand Muddle and Mint is also local.

“A lot of these are places that are going to be catering to both, right?” Flavin said. “In the pandemic, people had to kind rethink their businesses and figure out how they were going to sell their product,” she said. “And it’s easy to sell your product when there’s not alcohol in it. You don’t need licensing. There isn’t the extra tax on it.”

As people emerged from Covid quarantine, a celebration felt long overdue. But alcohol drinkers weren’t the only ones looking to raise a glass, said Cate Faulkner, who co-founded NA consulting business Zero Proof Collective with Jen Gilhoi. Non-drinkers wanted to toast to new days as well, but not just with a club soda and lime in hand – a drink the collective has dubbed the “last resort”

“If you’re only serving the ‘last resort,’ you need to do better,” Faulkner said.

The group’s goal is to raise the profile of alcohol-free drink options. Though there have been local advancements in NA options, Faulkner says progress has been mixed. Some businesses are just checking a box when it comes to NA drink menus, she said.

“It is our belief at Zero Proof Collective that NA beverages that are offered at every social gathering are thoughtfully crafted, selected with care, and appear equal to their alcoholic counterparts on a menu,” she said.

As these options continue to emerge, Faulkner believes the next phase of the NA boom will require a cultural shift. Many NA beverages are de-alcoholized from an already-brewed beverage. Some are crafted without alcohol at all. In either case, the process of creating these drinks remains complex, which means the price point for NA options remains high.

Many people still seem to think NA options “should be cheaper because there’s no alcohol,” Faulkner said. “There lies what we’ve identified as the great divide. Consider the value of a thoughtfully crafted non-alcoholic beverage that’s lower in sugar and calories without alcohol. Consider that to have a higher value rather than a lesser, lower one. That mindset will change the world.”