Why the founders of the nonalcoholic beer brand sold the company.
By Winter Keefer
November 22, 2022

Jeff Hollander and Paul Pirner stopped drinking alcohol around the same time nearly a decade ago, but the friends didn’t lose their taste for craft beer. At the time, the nonalcoholic beers on the market just didn’t satisfy this discriminating duo. So in 2016, they set about creating their own. Initially sold in locally owned Twin Cities liquor stores, Hairless Dog quickly landed a national distribution deal with Total Wine. But in August, Hollander and Pirner sold their company to another Minneapolis-based brewer, Finnegans Brew Co. Here’s why.

Pandemic competition: The pandemic changed everything, Pirner says. Prior to 2020, Hairless Dog contracted with outside brewers to produce and can its beverages. But when bars shut down, Hairless suddenly found itself competing against larger brands for production time. “When the pandemic came, everybody else in the consumer goods industry also started putting their product into packaging and cans, moving from barrooms and other social settings onto store shelves. That’s when the cost of all of those raw materials skyrocketed.”

Staying connected: The founders will continue to serve as consultants for Finnegans as the brewery dips into alcohol-free beverages for the first time. (Hairless uses a proprietary method where alcohol is never introduced rather than stripped out.) They know the transition to outside advisors won’t be easy. “It’s difficult to put boundaries up on something that you care so much about and say, ‘All right, I’m not supposed to be giving all of my time to this anymore,’ ” Pirner says. “But, you know, it is what it is.” The duo hopes to stay involved in some capacity even after the transition is complete.

What’s next: Beyond Finnegans, both men say new projects are brewing, but they’re not quite ready to share details. Hollander promises one of the endeavors will be “just as exciting, breathtaking, and new” as Hairless Dog.

Advice on selling your business: “Look after your happiness,” Pirner says. “There are a lot of ways to accomplish what you want to accomplish, so don’t be afraid to make a move. At the same time, know that it’s going to be a hard path to go down.” 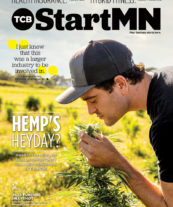 ForeverWare is on a Mission to Reduce Restaurant Waste
From the Expert: Growing Your Brand on TikTok
Paths with Purpose
TCB Q&A: Techstars CEO Maëlle Gavet
See all stories by this author >